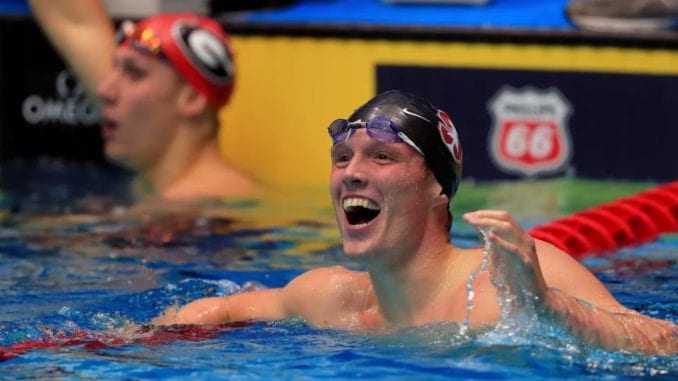 In an interview with Swimming World magazine, Abrahm DeVine, an NCAA Champion Swimmer, has come out to the world as a gay man.

“I’m a gay athlete. There aren’t too many of us, so when I came out to my college team, that was a really tough time for me,” said, Devine.

Mr. Devine, who is 2018 2018 NCAA Champion in the 400-individual medley and the Pac-12 Swimmer of the year – plus an Olympic trials competitor in 2016, revealed in the interview with David Rieder that his personal struggles with being a gay man nearly led him to quit the sport.

But after talking to his former teammate, Mx Williamson, he ultimately decided to carry on.

It was then Mr. Devine shared with his Stanford teammates his truth. And the good news? They embraced him with total support.

“I remember that being a pretty emotional time, and just feeling my whole team wrap around me and feeling that love in a place where I hadn’t really felt it, that was definitely pretty special for me,” DeVine said. “Just seeing them kind of prove me wrong was definitely special, something I’ll never forget.”

“Growing up gay in any sport is definitely tough. There’s a culture that is created in a lot of sports where being gay is an insult. It’s something that gets tossed around and makes you not want to go to practice or not want to hang out with the team or be a part of the team.”

Mr. DeVine, a senior, is still able to compete for a spot on the 2020 Olympic team. What inspiring about this athlete’s story is how he has joined so many athletes in recent years who have stepped forward to share their truth.

That he was embraced by his fellow teammates says something about the changing views of LGBTQ persons in sports.