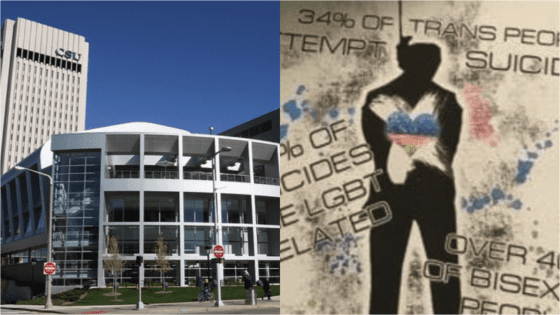 A free speech debate has erupted at Cleveland State University after LGBTQ suicide fliers started popping up all around campus.

Last week, the flier was first seen after it was posted on a billboard in CSU’s main classroom building. This apparently happened on the very same day that the school opened it’s first LGBTQ center.

The poster itself, which you can see above, shows a man hanging himself with the words “Follow Your Fellow FAGGOTS” written above him.

While no person or group has claimed responsibility over the poster, the words “Fascits Solutions” was printed at the bottom.

University officals removed the flier immediately after being told of it, and an investigation is currently in the works.

That said, the fact that they took down the flier has now started arguments.

More: Gay Teen Who Stabbed His Bullies Says “I Was Afraid For My Life”

William Dube, university director of communications and media relations, told WOIO-TV that the flier was taken down because “proper posting procedure was not followed.”

“Prior approval needs to be provided before posters are added to that billboard,” he added.

That said, the school has chosen not to comment on the flier’s contents itself. They just say they want to uphold the students’s right to free speech.

The university president Ronald Berkman even confirmed that they wished to “fully committed to campus community that respects all individuals,” the school was also “committed to upholding the First Amendment, even with regard to controversial issues where opinion is divided,” according to BuzzFeed.

It was only after several people expressed disgust at Berkman condoning the poster (thus sending Cleveland State University in turmoil) that he later released a statement sharing his “personal outrage.”

Then, the school hosted a public meeting in order to provide a place for students to voice their concerns and to try to come up with a solution. While none has been found yet, the school is hoping that the open communication with the students will help stop the fighting.