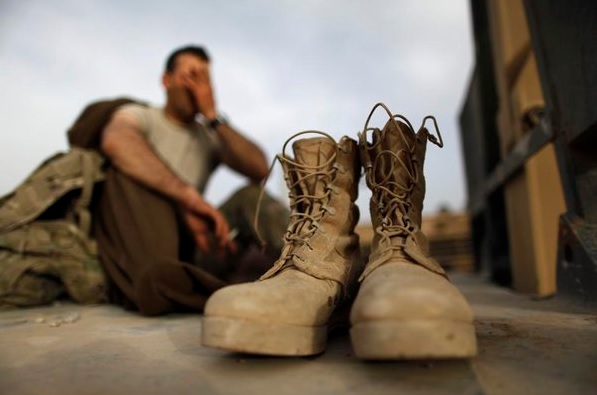 He says he’s marking his territory

By: Kurt in Nashville

It started about a year ago, around the time Cody and I started dating. We were doing a military role play where he was the Sergeant and I was the Private.

“Grab your boot and hand it to me,” he said with a deadpan face. “That’s an order.”

And so that’s what I did.

Minutes later, he stroked out three large squirts into one of my tacticals [suede boot].

When we were done, he said, “Your turn”. He then placed that same boot in front of my Johnson and whispered into my ear. “Keep going man, you are almost there.”

And because the f***** knows I’m a sucker for deep kissing, he coaxed it out of me.

Minutes later, I released into the soles.

What happened next though is that part that really freaked me out. You see Cody made me put them on. I’m not kidding, he really did.

Hesitant and even a little disgusted, I told him that I wasn’t really into it. But he wouldn’t listen.

In our past lives, both of us were in the Army. In fact through conversation, we both discovered we had spent time at Ft. Campbell; a large base on the Kentucky/Tennessee border. Apparently, we had missed one another by just a few months.

I’m mentioning this because when he ordered me to release, I instantly could pick up on his military training. There’s some things you can’t fake and the “copy that” comment was one of them.

Call me stupid or weak or whatever you want but I did it. And let me tell you, the moment I did it he became extremely turned on. Like CRAZY!

Before I knew it, he was topping me from behind like a wild jackrabbit. It was like some switch had gone off on him deep inside. I really can’t explain it.

Look, Cody is a good guy. I’m also very attracted to him. He’s tall, built, my age (35) and masculine – all the things that typically grab my attention.

That’s not to say I’m submissive. I’m not. In fact, we’ve had issues in the past because both of us are somewhat alpha. This is why the boot thing has been a challenge.

According to Cody, whenever he releases into my boots, he’s “marking his territory”. It makes no sense to me but that’s how he explains it.

“Knowing I’m with you when you have them on makes me feel good. Don’t make a big deal out of it, OK?”

But the thing is I really don’t like it. They smell to high heaven and it just grosses me out. I’m not judging anyone who is into this. It’s just not my thing.

Shortly after that first time, I tried turning the tables on him. In other words, I made him chunk into his tacticals.

And you know what? It’s backfired. Massively.

It turns out that not only does he like when I squirt into his boots, he digs wearing them afterwards.

How messed up is that?

Several friends of mine have told me that this is all about a fetish. They think it’s not that big of a deal and that I’m making a mountain out of a molehill.

Maybe I am. But still, this seems to go beyond the norm.

It’s gotten to the point that on every other hookup, he ends up unloading into my boots. Last time, he shot into both. And if he’s not stroking out milk into them, he’s sniffing them just before he nuts.

It’s like this. I love Cody. Honestly, I do. The guy just does it for me in so many ways. And I think we could have a good future together.

But it feels like we’re getting to the point where this whole boot thing could be a deal breaker. I know he doesn’t do this to humiliate me. It’s not like we have a master and slave dynamic going on.

That said, I do think it’s what he said it is – marking his territory. But do I really want to be branded like some type of farm animal.

My boyfriend is a brutal top that detaches from reality