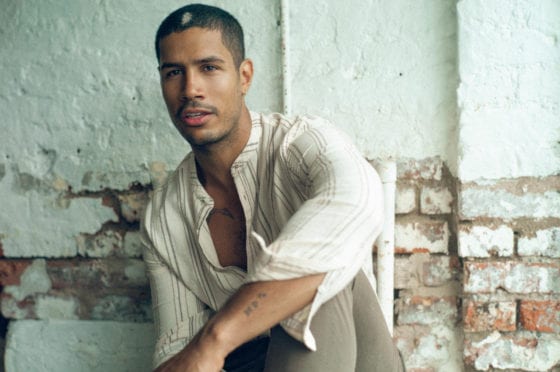 Recently, I became aware of actor Chuku Modu after watching several episodes of “The 100” (final season). He plays the part of Dr. Gabriel Santiago. I think what stood out to me was this actor’s stunning looks, coupled with his stellar acting abilities.

Because I know visitors to Men’s Variety like learning about different entertainers, I decided to do some research and write up a quick “fact file” on this rising star.

Surprisingly, Chuku has some impressive credits under his belt, including several short films. I have a strong feeling that over the course of time, we are going to be seeing more of Chuku as the need for young, talented, multi-ethnic actors increases.

And so, without further ado, here’s seven facts on Chuku Modu you might now know.

Many people want to know Chuku’s ethnic background. In looking at the research, he was born to a Nigerian-German father and a mom who is Anglo-Irish.

In looking at his past, Chuku is athletic. A tell-tale sign is his physique. Scrolling through his Instagram account, it is obvious he likes to spend time in the gym and outdoors.

His official bio on IMDb shows that he took an early interest in sports at a young age, including boxing.

Me and Ser Jorah the master of the friend-zone aka the bad man and gentleman Iain Glen. This was day one of rehearsals and pretty much the first time running the sequence, I was just concentrating on not hitting the man! Anyway, what an honour to live and die on what will go down in history as one of the greatest shows ever. A childhood dream for me, I've been a fan boy of these types of shows and films since I was running around in nappies. Truly thankful for all the love and support. I didn't know I knew so many wonderful people. Looking forward to watching the rest of the show as fan boy number 1 again. Big love 💚 P.s I'm still hoping I come back as a White Walker with a mash up face 😂 #thedream #coulddieahappyman #dothraki #gameofthrones #got #aggo #akho #jorahmormont #jorah #iainglen

Bear in mind this is one of the best known, oldest institutions of learning on the planet, with its beginnings in the middle-1300’s.

In 2016, his acting career really took off when he landed a part in the movie, Me Before You, starring Emilia Clarke, Sam Claflin and several other well-known actors. Chuku played the part of Mauritian Waiter.

A really cool part of Chuku’s background is his role in the short-film, Heavyweight. Playing the part of Paris, he is a boxer, working through an environment of hyper-masculinity where same sex attractions are a big no-no.

Another notable part of this actor’s work is his role on the smash-hit series, Game of Thrones. In 2016, he appeared on three episodes and played the part of Aggo.

Chuku Modu is an extremely talented and versatile actor who has a strong presence on camera. I have no doubt that in the years to come, we will be seeing more of him.

Sometime in the near future, he will be appearing in new series Émigré as Jarrel. I suppose we’ll be hearing more about that soon!