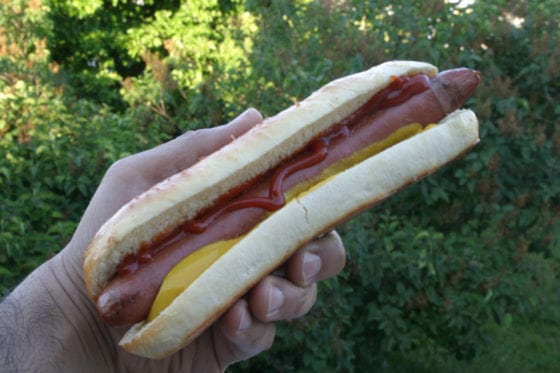 Just when you think you’ve heard everything, now comes word of a high school coach putting his penis in a hotdog bun and then showing it to players. According to a report in the Spokesman Review, the incident occurred during a leadership camp conference last summer.

Going by public records that describe the allegations in detail, which several news organizations apparently obtained, the coach wedged his manhood in a hotdog bun and said, “You think that is a big dog – take a look at this.”

Jim Sharkey, who is a coach at Ferris High School, was suspended from his teaching duties in February. Here are a few specifics of the lewd allegations, as obtained by the paper:

“A couple of weeks after the camp, a Ferris player came forward and said that while Sharkey was grilling, he turned with his exposed penis inside a hot dog bun. Sharkey said, “You think that is a big dog – take a look at this,” according to school records that listed multiple different versions of the same quote.

While the coach got a written reprimand and was allowed to coach this past fall, school officials placed him on administrative leave Feb. 1 after more players claimed to have seen the hot dog incident and other students brought up separate incidents of questionable behavior by the 11-year teacher and coach.”

Coach Sharkey claims he did not expose himself. Local CBS affiliate, KREM, reports the coach was upset with the district's director of personnel, Mary Templeton, who revisited the alleged behavior in January after more students came forward.

“You already investigated this and I signed a paper,” [Sharkey said], as revealed in documents.

[Templeton] said she had received new information that he had exposed himself.

“How many students said I exposed myself?” said Sharkey.

Coach Sharkey is also being accused of drinking alcohol in front of the players at the summer camp. Additionally, someone has reported that he called a female student a “puck slut” or “puck bunny” because she was pals with several hockey players attending the school.

Allegations Players Fingered Each Other

Reports also allege that several football players would surround a random player fellow player on their birthday and shove fingers in their anus. They even had a nickname for this activity called “juicing”. No adults knew of these activities, according to reports.

The coach denies he was drinking during camp. He does, however, recall other adults drinking, according to reports. He acknowledges comments made to the female student but shared they were “not meant to be inappropriate.”