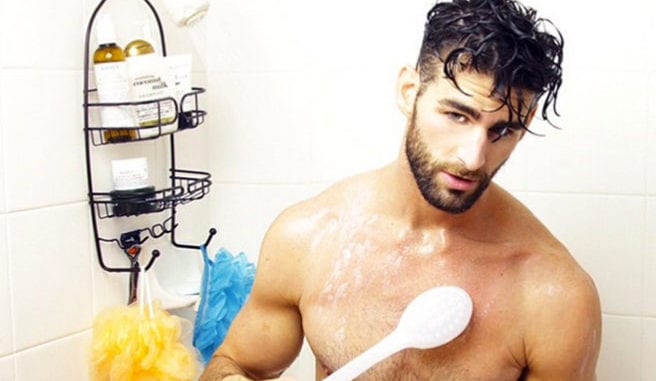 They say the eyes are the window to the soul. But did you know that if you wear contacts, you could potentially lose your sight by showering with them on? That may sound crazy but it’s true.

Recently, I visited my ophthalmologist because of persistent redness and tearing in my right eye. Before visiting his office, I had also noticed a pussy substance oozing out each morning, which I later learned was conjunctivitis.

Worse, the eye was painful to touch. It got so bad that I had to stop wearing my contacts and go back to putting on my trusty pair of glasses. I’m near sighted so without some type of eyewear, I’m kind of screwed.

Anyway, after the doc gave me a thorough examination, he diagnosed me with a bacterial infection. I found that kind of odd because I always take special care to wash my contacts and hands several times a day.

At some point, he asked me if I ever shower with my contacts on. It took me awhile to think about it before saying, “Yeah – pretty much all the time.”

That’s when he suggested that my eye problem could have been caused by the showering with them on.

Hard to believe but it’s true.

Apparently, if you shower with your contacts on, the water and any bacteria in it can remain in the eye and start to breed. In turn, this can contaminate your lenses, causing an infection called keratitis.

He explained to me that this type of bacterial infection (in the Staphylococcus Aureus family) can range from mild, which is what mine was, to severe.

If left unchecked, keratitis can actually cause a person to go blind! Who would have thought?

I did a little checking and found out that the U.S. Food and Drug Administration recommends against exposing your contacts to anything besides contact lens solution, including tap water (even if filtered).

My ophthalmologist advised that it’s always a good idea to remove contacts before stepping into a steady stream of H20.

He even suggested that if I get splashed in the eyes while wearing them, I should take the contacts out and then use a dry, clean finger and disinfect them using a solution.

And one thing he told me that I had never thought about was the importance of thoroughly washing your hands after going poop. This made sense when you consider that bacteria live around your anus. It doesn’t take much to spread germs!

The good news is that with a prescription of antibiotic eye drops, my infection and symptoms went away in a few days.

I hope my experience helps you to avoid any eye problems. After all, you only get one pair.