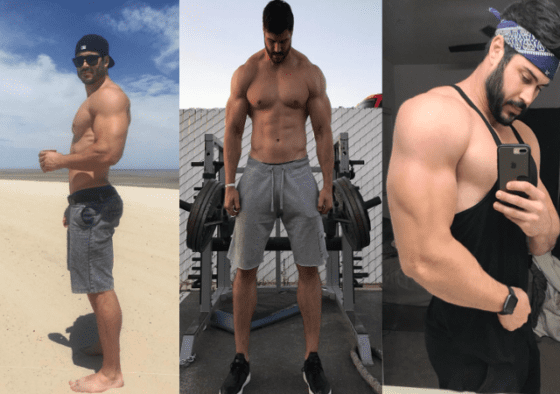 Tree Man! Come Save Me!

Looking for your next internet obsession?

Look no further, because Tree Man has arrived.

The Tree Man craze started quickly, and now it’s certainly hit and its hit like a tidal wave.

But who’s the person at the very center of the storm?

At 6 feet and 7 inches, Jones is TALL, but adding to that the man is also incredibly jacked. He’s got muscles for days and fans that stretch for longer.

The crazy over Danny Jones started just a couple days ago. Gay Star News reports that it began with a tweet that discovered the man and quickly gained traction before completely running off the rails.

This not a man, this a tree. pic.twitter.com/0rU95oBbxh

From then on tehre was no stopping the ongoing storm of followers willing to talk about, salivate over, and obsess over Danny Jones and his body.

In just a week his follower count has skyrocketed up to over 648 thousand accounts.

Sadly, while people all obsess over Jones and his body, he’ll snuggling up to his already set girlfriend.

But don’t worry, we have more information to make you yearn and cry yourself to sleep for him, because not only is he hot but he’s also a good person.

For instance, he once worked as a firefighter (some of you are probably groaning right now), and even trained to be an emergency response medical technician.

But, right now he has focuses more on personal training, cause with a body like that he doesn’t need business cards.

Adding to that, he also has an upbeat personality that’s perfect for inspiring others to change. In fact, he may even have a little bit of a life coach in him.

On his website, he even used his own personal experience as being overweight to inspire others to exercise.

‘I am a firm believer that ANYONE can make the same change that I did and become the best version of themselves. All it takes is the initial thought and desire to make the change and a plan to put that change into action.’

If you want a taste of more Tree Man, check out these photos down below or head over to his Instagram account.

Huge THANK YOU to all you new followers and all of you guys that have supported me for years. I'm continuously humbled that anyone would be interested in my journey. . So again, thank you for giving me the platform to influence others and hopefully make a positive impact on at least a few people. Love you guys! 💪🏼 .

Bring on the LEAN . Let's get you that summer '17 body. NOW. Stop waiting. Email me with questions or signup for my online training at my website. No matter your circumstance, I can create a plan for you. . 📧 [email protected] 💻 www.dannyjonesfitness.com .

Having a few beers today, but still trying to stick to my meal plan for the most part. Brought my Level-1 meal replacement protein with me while everyone else is having double bacon cheeseburgers 😫 . Dieting isn't easy but this stuff makes it easiER. Get the Ice Cream Sandwich flavor and thank me later. . Free shipping using my link: . www.1stphorm.com/dannyjonesfitness .

I've had enough of these damn pigeons. Bird shit everywhere, there's even a nest with some eggs. It's ridiculous. Bought a fake owl for my roof, no luck. Bought rubber snakes, no luck. This literally just happened. 😂

How I've been 22 of the last 24 hours 😂 – I left the house for a couple hours today to get some exercise in, but besides that, it's been underwear, coffee and meal plans for all the contestants in the One Month Makeover. Gonna be an all nighter, but I WILL have all of your plans done and sent by tomorrow morning! – It's not too late to signup either! Tap the link in my bio to head to my website and see the full details on joining the Makeover and potentially winning $1000 😁 –

Don't really know what I was doing here, but I'm pretty sure there was a large pepperoni pizza directly below me…

And, check out these fans going crazy over him.

😂😂These are making my day #treemancontinues