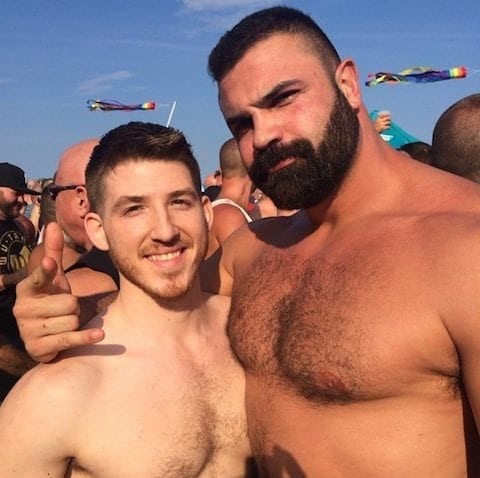 There seems to be a number of stereotypes about gay bears borne from a place of ignorance and misinformation. Here are five lies about bears debunked.

In the world of gaydom, it’s no secret that various subcultures are classified (rightly or wrongly) into categories broken down by body type.

Here, we are talking about a spectrum that includes bears, wolves, jocks, otters and bulls.

For the purpose of this article, we’re going to focus on gay men who identify as bears.

Not long ago, a paper was published in the Journal of Clinical Nursing which suggested that as a group, bears suffer lower self-esteem and engage in riskier sex than their non-bear counterparts.

But is this really true?

The problem with this study is that it used a meta-analysis of previously conducted research studies to arrive at a conclusion that may or may not be accurate. And so as a result, one cannot generalize conclusions to a larger population.

Sadly, some publications have done just that, making sweeping assumptions about bears that are not grounded in scientific research. The end result can be harmful stereotypes about a community that reinforce a false narrative.

What follows are 5 harmful lies about gay bears that need to stop. How many of these have you bought into?

1. All gay bears are obese

Out of all of the stereotypes, this one is perhaps the most harmful. While the exact definition of what constitutes a bear is certainly up for debate, it is a complete fallacy to believe that all bears are obese.

Gay bears can be:

2. As a group, gay bears have low self-esteem

The problem with this stereotype is that it is attached to the myth that gay men who are bears are unhappy with their bodies. It also pushes gay men who may be heavier into a subcategory of body types they may not identify with. Remember, being a bear is as much about being part of a community as it is having a certain body type.

Many gay bears are:

Yet another stereotype that comes from a place of misunderstanding about bears. The truth is many gay men who fall within the gay bear spectrum are athletic.

In fact, a good number of bears are extremely muscular and regularly partake in physical activity and exercise. Just visit Bear World Magazine and see for yourself.

The problem with this particular assumption and stereotype is that it feeds into a narrative that bears are overweight gay men who are so desperate for attention that they’ll risk their health in order to get laid and thereby validated.

While this may be true of some gay men, it is also true of some straight men. What’s more, not all gay men who are heavier consider themselves to be bears.

As a group, gay bears:

The final lie that needs to stop about gay bears is that they tend to be older. This is simply not true. What is happening here is that some people are confusing bears with daddies (aka DILFS).

Gay men, just like their straight counterparts, come in all shapes and sizes. The difference is that in gaydom, we’ve perfected the art of labels when it comes to body types. Did you know some of the lingo used once served a historical purpose?

That’s why it is important to educate yourself about the larger essence of the LGBT community with the goal of avoiding common stereotypes.

The truth is an encounter with a gay bear may bring about a powerful, life changing experience.

A great documentary to consider ordering (or downloading) about this topic is: Bear Nation by Malcom Ingram. In the film, you will find lots of insight about what it means to be a bear and what it does not.

Please be sure to share this post with others to help push-back against harmful stereotypes about the gay bear community.