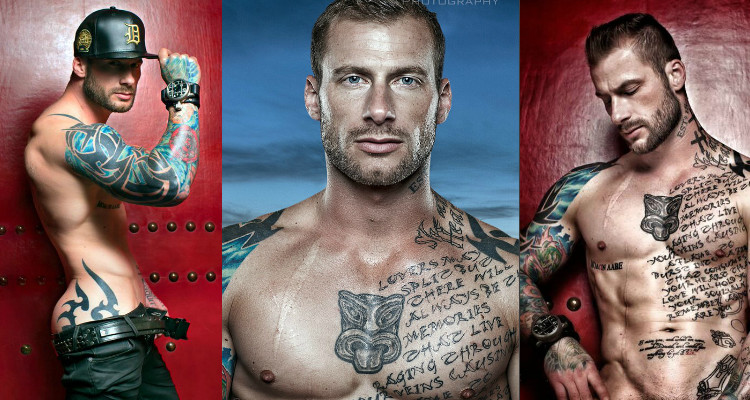 David Byers, a 34-year old male fitness model known for his sexy tattoos, chiseled bod and rugged looks has been arrested in San Diego for a series of robberies.

He was picked up by police on Wednesday as the result of a multi-state, extensive manhunt. Allegedly, Byers is responsible for robbing a Chase Bank in Connecticut (same once twice) as well as a Citgo Gas Station.

Byers “bad boy image”, popular among gay and straight followers alike, seems to have been a truer representation of his personality than some may have thought.

Ditched cops from coast to coast

Last Friday, he was able to successfully evade cops in New York. Apparently, cops almost nabbed him at a hotel bar but he was too fast for them. Byers was able to escape and drive off in a stolen Ranger rover to Pennsylvania; a vehicle he later ditched.

As reports go, he then stole another car and made his way westward towards the Golden State. But not before being spotted at a Yuma Arizona, Holiday Inn.

According to WCBS New York, Connecticut police want to extradite Byers back to their jurisdiction, where he will face charges of robbery in the first degree, robbery with a gun, two counts of felony larceny, third degree robbery plus charges of reckless endangerment.

Officials share that Byers does have a previous arrest record in San Diego. Past charges include burglary, resisting arrest, grand theft and driving while intoxicated; all which happen to be related to an incident in March; something cops have yet to reveal.

More: Is your boyfriend a psychopath?

Apparently at one time, he also engaged in what some refer to as “stolen honor”; the practice of pretending to be a former military veteran. In this case, it was a Navy Seal.

Those who know the hunky model seem genuinely stunned stunned.

“I know he’s an unusual guy, but bank robbery doesn't seem like his thing,” says Michael Stokes, a California photographer who just this year did a series of shots with the hunky fitness fanatic. “He’s always been so decent and respectful with me.”

A quick check of Pinterest reveals the model has a large following, with fans who have accumulated pictures of him throughout the years.