Guilty on both counts

After deliberating for a week, a San Diego, California jury returned this morning with a verdict for David Enrique Meza (a.k.a. Sean Cody’s Francisco). He was accused of brutally murdering his wealthy gay lover in Mexico back in 2015, and then conspiring to obstruct justice by covering up the murder.

They found Mr. Meza guilty on both counts. A sentencing date has been scheduled for August 7th. 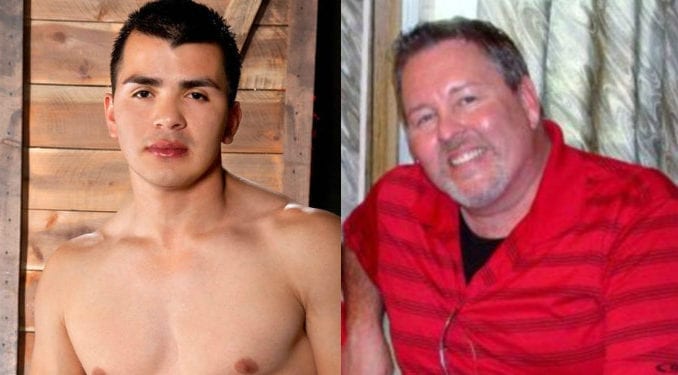 As we pointed out recently (thanks to Str8upgayp*rn), Meza is now the second gay-for-pay Sean Cody model that has been convicted of murder after stabbing a gay man, following Jason Andrews (Sean Cody’s Addison).

Yesterday, GPB reported that a third Sean Cody model, Chase, is currently on trial in Kentucky for murder charges, too.

Mr. Meza (who went by the name Mario Romo as a Sean Cody actor) was arrested in 2015 soon after his wealthy, older gay boyfriend, Jake Merendino, was found viciously stabbed to death in a Mexican ravine. His throat was slashed. Investigators counted over 20 stab wounds in his chest and stomach.

Federal prosecutors successfully proved that Meza “murdered his lover, because [he] believed he stood to gain millions of dollars and a beautiful condominium on the beach in Rosarito,” and they presented several lines of evidence, including Meza’s prostitution ads and gay adult videos, handwritten letters from Meza to Merendino, DNA material, and photographs of the couple in Mexico.

Meza’s girlfriend, who is also the mother of his child, Taylor Marie Langston  had originally faced the potential of conspiracy charges in connection to the murder.

Per reporting from Str8UpGayP*rn, it appears she was given a plea deal. “Langston, currently free on bond, is scheduled to be sentenced next month. The couple’s baby (who was born shortly after Meza murdered Merendino) will be raised without its birth parents if Langston is sentenced to prison.”

According to the San Diego Union tribune:

“The two men met in 2013 after Meza, a body-builder who admitted in a video that he was straight but did “gay things” for money, posted an online ad. Merendino answered the ad, paying Meza $100 to visit his Pacific Beach hotel, said Assistant U.S. Attorney Robert Ciaffa in his closing arguments.

Merendino was smitten and the two dated long distance. Soon after Meza began sprinkling emails with “I love you,” he began to receive lavish gifts from Merendino. In their two years of dating, Merendino would give Meza a sports car worth $45,000, some $20,000 in cash and other perks, prosecutors said.”

We will update should more news on this case occur.