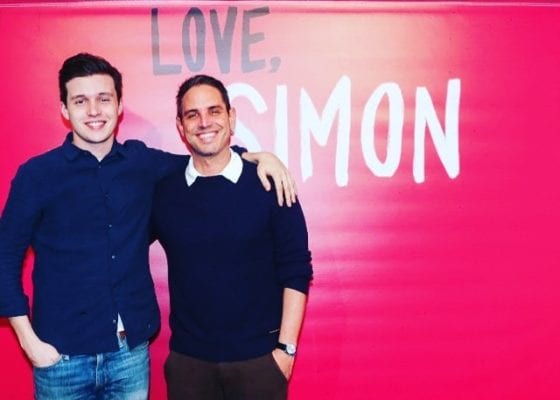 His movie Love, Simon released to a moderate success, and he’s hoping the film’s “average joeness” will end up being what makes it so spectacular.

To understand that mentality further, you have to understand some of Berlanti’s earlier experience in Hollywood.

Berlanti shares that he fought for the first romantic kiss on tv screens. While Will & Grace technically got the first gay kiss on tv, it was served as a quick and comedic peck.

Berlanti and show creator Kevin Willimason introduced the character Jack McPhee (played by Kerr Smith) specifically for the purpose of introducing a gay storyline (and eventual kiss). Sadly, the two were met with push-back by studio executives.

“I had to threaten to quit, basically because they wouldn’t let us have the characters kiss,” Berlanti told IndieWire. “At the time … there were shows that were fine to show lots of violence in network, but they wouldn’t allow a kiss between two gay characters. They asked me to run the show that year, and part of my agreement with them was that they would allow the character, Jack, to have a kiss. There was a lot of negotiation about that kiss.”

It was after that fight that Berlanti noticed how quickly the television business accepted gay storylines.

“I went from executives telling me, ‘You’re not allowed to have a gay kiss. If you’re gonna have a gay kiss, you have to shoot it from across the street.’ To within five years—’Wait a minute, why would you cut away here? Wouldn’t the characters kiss?’ And I’m thinking, ‘Yeah, sure. I’ll go back and put a gay kiss in the scene.'”

Because of this experience, Greg Berlanti is hoping that Love, Simon will start a similar change.

Love, Simon is not an amazing movie in itself. It’s a solid film with good acting and a respectable story, but it isn’t going to win any Oscars.

What’s amazing about the film is its ability to be accepted as a major motion picture with big backing by Hollywood. The hope is that the film, despite its so-so box office numbers, will push forward Hollywood films in the same way that those kisses in Will & Grace and Dawson’s Creek did for television.

“If movies are going to remain vital, then they have to tell the stories that feel like our world, especially the human ones,” he said. “It’s pretty apparent that audiences don’t want to see all the same people on the screen. Hopefully, stuff changes fast and furious, and it doesn’t take another however many years before there is another mainstream studio film with a gay lead front and center.”