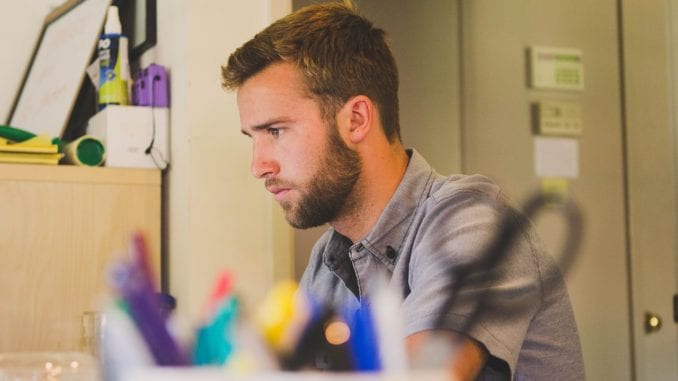 A new study published in the Journal of Epidemiology & Community Health has found people who work more than 55 hours per week are at increased risk for depression.

Men’s Variety spoke to Chicago psychotherapist John Linger about the research to gain insight. “The findings are troubling but not shocking. The hard truth is people spend too much time on the job because they feel like they have to, just to stay employed. Over the course of time, this can have a corrosive effect on mood,” says Linger.

Hoping to better understand the impact of long-term work weeks and mental health, scientists from the U.S. and U.K. decided to investigate.

To help them get at the answers, researchers drew upon data from a longitudinal study from Understanding Society, which has been tracking 40,000 households since 2009.

The scientists focused in on data from 11,000 men and 12,000 women, assessing for how symptoms of depression were linked to working more than 40 hours per week.

Stated differently, the more people spent time working on weekends, the more likely they were to be depressed.

Working outside of the office, particularly from home, has become the norm for many people. The Gallup organization estimates nearly 43% of all Americans work remote for at least some part of the work week.

“We live in an electronic world where folks feel like they need to be constantly connected to their emails, text messages, and phones. As a result, boundaries around work have become more diffuse. If you aren’t careful, its very easy to get burned out and depressed,” says Linger.

He suggests that workers make the conscious choice to set firm timeframes around office duties and then stick to it. “If you commit to yourself not to touch any work-related material on Sundays, that commitment needs to be sacred,” Linger offers as an example. “Spending time with loved ones, socializing, and resting are critical for good mental health,” he adds.

“And employers also have a responsibility to encourage workers to enjoy time off without feeling the need to be tethered to the office. That starts with supervisors setting the right example by not sending out emails to subordinates after office hours,” he adds.

Previous research released in 2018 revealed that employees who constantly were active on work tasks during non-office hours experienced greater unhappiness in their personal relationships.