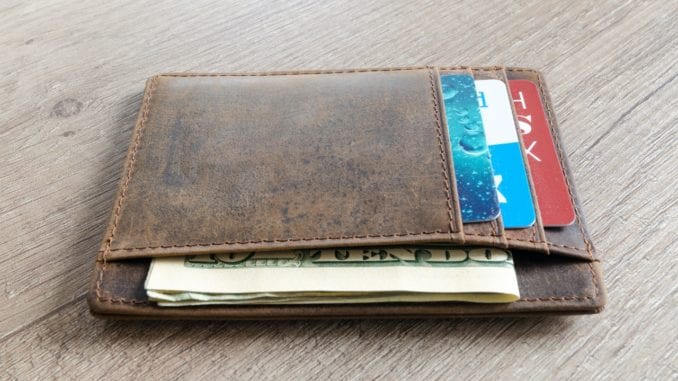 Do you still carry a wallet? Should every man own one? Less is more when it comes to modern wallets, but it wasn’t always that way. Men used to carry large wallets, handbags and even purses. So, here’s a deep dive into the history of wallets and what they mean to the psychology of men.

When I was a boy I used to love playing with my Dad’s wallet. I loved the old, worn leathery look of his wallet. It had a certain charm to it, a certain smell. My Dad’s wallet was filled with all sorts of artifacts like crumpled receipts, ID cards and family photos. Most importantly, I associated my Dad’s wallet with being an adult man.

That old, leathery wallet is about as masculine as a moustache. How you wear it and what you put into it says a lot about who you are. Your first wallet might have had superheroes and a large Velcro strap. Your current wallet might be so worn out that you can barely recognize it. Put plainly, a man’s wallet is a rite of passage.

Brief History of the Wallet

Can you believe that men used to carry purses? Between the 1300s and the 1600s, men carried around purses and handbags. That’s because there were only coins during that time, and nobody needed an ID card. Purses carried everything from coins and cabbage to knives and noodles.

The traditional men’s wallet came about during the late 1600s along with the first paper currencies. The first wallets were handstitched leather carrying cases that were ideal for transporting paper notes and other small goods. People didn’t tuck them inside their pockets. Men wore them in the same style that they wore coin purses – attached to their belt and draped below the hip.

During the 1800s, men would tie a belt around their cowhide wallets and drape them from their hips. They mostly kept materials for making cigarettes – a bit of tobacco and some rolling papers.

The folding wallet was created by a company called Hermes in the 1920s. During this era, leather wallets became the most popular accessory for men. Wallets survived the Great Depression and World War II. In fact, wallets became important artifacts for identifying fallen soldiers.

Wallets became fashionable from the 1950s to 1970s. That’s when you saw different colors emerge, more pockets and different fold styles. Credit cards enhanced the functionality of a wallet and carrying a wallet became a rite of passage for adult men.

During the 1980s, you got wallet accessories like Velcro fasteners and chains. However, the traditional leather wallet remained the mainstay. Once again, changes in currency have facilitated changes in how men use wallets.

Now, there is less need for paper currency. So, wallets are losing a bit of their functionality. You don’t need them to carry essential items. You can pay for just about anything with a credit card or even your smartphone.

Yet, wallets haven’t disappeared all together. Instead, they’ve transferred to the realm of fashion like wrist watches. They aren’t absolutely necessary, but they exist as statement pieces. Your wallet says something about your personality.

What’s in Your Wallet?

Cash certainly isn’t the king that it once was, but plenty of guys still keep some paper money inside their wallets. My father had a rule – every man should always carry five dollars in his wallet no matter what. You never know when you might need to drop a few bucks; it’s just a good practice for the classic gentleman.

ID cards and driver’s licenses have a permanent place in a man’s wallet. For all the world’s technological advances, we haven’t invented a better place to put a copy of our faces. So, that’s why nearly all wallets come with a slot that showcases your photo ID.

Banking and credit cards take up a lot of wallet real estate. Nearly all wallets have some slots for bank cards. Some men even place their bank cards on the outside in the photo ID section. This helps you use your card for contactless transactions.

A man’s wallet isn’t just for the essential daily carry. Some men put important keepsakes in their wallets. Condoms, keys, coins, receipts, phone numbers, business cards, you name it. Just sit down one day with your wallet and go digging. You’ll probably be surprised by at least one item that you’ve tucked away in there.

This a classic wallet style with two folds. It’s the most popular wallet style because of its simplicity. Just open it up and you’ve got access to all your items. There is usually a large open flap for paper money and either side of the fold contain pockets to slide in your cards.

Bifold classic wallets have a slim profile. They fit comfortably in your front or back pockets without creating too big of a bulge. These wallets are also plenty versatile and come in a variety of materials and sizes.

This is a variation on the bifold classic. The trifold wallet has two outside flaps that fold in on top of each other, thus creating three folding sections. Plus, there’s the open top flap for cash. When you think of a fat wallet, you’re probably imagining the trifold wallet.

The trifold wallet is ideal for men who need to carry more than just a few cards. There are way more pockets than a bifold. Men who keep everything from old receipts, credit cards, membership cards, wads of cash and family photos will often have a big, scraggly trifold wallet.

The clip wallet is a slim design that exposes some or all your belongings on the outside of the wallet. There’s a sturdy metal clip that sometimes gets covered with a fabric. This is the backbone of the clip wallet because you can slide all your cash and cards in there.

There are a few drawbacks to the clip style wallet. The fabric on the clip tends to wear down over time and that metal can dig into your flesh in some instances. Also, your important items are a bit exposed with the clip. It’s sturdy enough, but if you snag it on something, you could lose everything in one go.

This wallet was more popular when men were writing paper checks and traveling without much cash. That’s why it’s still sometimes referred to as a checkbook wallet. In fact, you can hardly find breast pocket wallets for sale in the men’s section because men rarely use them anymore.

This wallet style is longer than a bifold. There are still two folds, but the wallet itself is about 7 inches in length. It was meant to fit inside the breast pocket of a suit jacket. There’s an open slide section for checkbooks. Sometimes, there’s a plastic flap there, as well. Then, the opposite side has about half a dozen or more slots for cards.

Related: 7 Khaki Suit Ideas for Men to Get Your Style Going

The cardholder wallet is ideal for trips to the gym or when you don’t carry lots of items. If you only need one or two bank cards and a photo ID, then you should look into carrying a cardholder wallet. It has a minimalist design. There’s a slot for a photo ID that’s wrapped in plastic. Then, there’s a section on the opposite side for a couple of cards. That’s it.

Sometimes, you only need a single card and an ID card. So, why not limit your carry weight and strap it all together with a plate of aluminum that doubles as a multi-tool? There are two main drawbacks to minimalist wallets. You can lose them quite easily if you’re not careful. Also, they don’t pack much of a style punch when compared to a high-quality leather bifold.

The very definition of a wallet is being challenged in recent years. With the introduction of digital currencies, the need to carry paper money and credit cards is fading away.

Some purchases can be made from your smartphone. Digital wallets bundle your assets in a non-material way but lack the style points of a traditional wallet.

Wallets go well beyond the functionality of simply carrying items. Men’s wallets are a fashion piece and they reflect our masculinity in a respectable way.

They say something about who we are, where we come from, and how we represent ourselves to society.

Related: How Men Can Create A Simple Fashion Style

Even with digital currencies and e-wallets, men haven’t fallen out of love with the traditional wallet. The type of wallet you carry says something about your personality and your intentions for the occasion. Sporting a minimalist wallet to the gym is a good look. So is carrying a leather wallet to a wedding.

You can look dapper in a suit, but if you pull out a bunch of loose, crumpled-up bills to pay for a drink you’ll ruin your vibe completely.

Wallets are just one of those things that truly define being a man, but don’t laugh when you see a man wearing a purse. He’s just way, way old school.