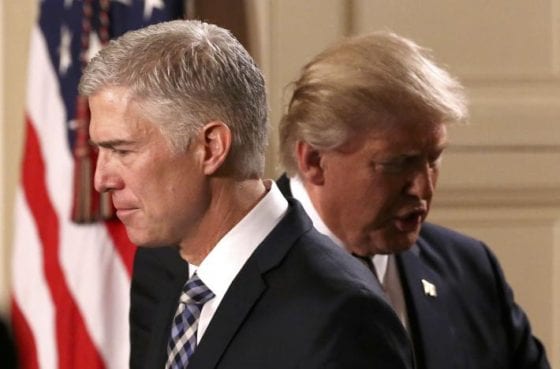 Neil Gorsuch is too extreme for the court

Donald Trump has selected Colorado federal appeals court judge Neil Gorsuch as his choice for the Supreme Court. This choice represents a very conservative jurist; someone Mr. Trump promised during the 2016 election cycle.

He is also in the mold of the now deceased Justice Antonin Scalia.

While Gorsuch is not as outwardly partisan as Scalia, his history suggests he would follow his footsteps closely.

Gorsuch has a well-known history of writing in favor of “religious liberty”; the kind of rulings that allows public courthouses to display statues of the Ten Commandments outside on the lawn.

And then there are his thoughts on health care and the famous “Hobby Lobby” case.

Here, Gorsuch sided with the religious owners of Hobby Lobby, finding that “the contraception mandate in the Affordable Care Act substantially burdened their religious exercise in violation of RFRA” (Religious Freedom Restoration Act).

Also emanating from his conservative belief system, Gorsuch has been open about his feelings that the judiciary has been used too much by liberals to create social change.

In an article for the National Review titled “Liberals’N’Lawsuits,” Gorsuch criticizes the left for being too litigious and seems to communicate through his writing that the courts have overstepped with rulings in favor of same sex marriage.

But rather than use the judiciary for extraordinary cases… American liberals have become addicted to the courtroom, relying on judges and lawyers rather than elected leaders and the ballot box, as the primary means of effecting their social agenda on everything from gay marriage to assisted suicide to the use of vouchers for private-school education.

Looking at the totality of his writings, coupled with his rulings, he does not appear to be friendly at all to cases involving general civil rights, LGBT rights, immigration or religious diversity.

LAMBDA Legal has put out an extensive guide as to why Gorsuch is an unacceptable choice for the United States Supreme Court. It is important to know this is the first time LAMBDA has ever opposed a nominee before the confirmation process begins.

Here is a statement from their site:

“We absolutely must not confirm a Supreme Court nominee who has ruled that the religious beliefs of employers can trump the law.

It is a short hop from birth control restrictions to restrictions on the intimate relationships and health care needs of LGBT people.

“Through his decisions, Judge Gorsuch has promoted a vision of a society where some religions prevail over others, and are invited to flout the law.

Judge Gorsuch’s judicial record is hostile toward LGBT people and his nomination to the U.S. Supreme Court is unacceptable—we oppose.”

Here at the blog, it is our belief that Judge Gorsuch’s record represents a very real threat to LGBTQ rights, women’s rights and civil rights. His views appear to be outside of the mainstream.

He should not be confirmed.