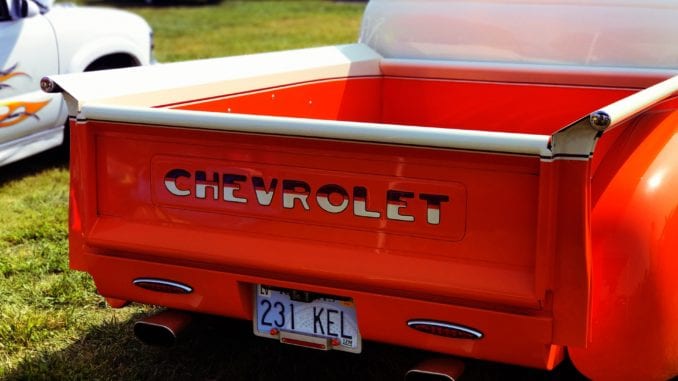 Pick-up trucks – they are among the most popular vehicles on the planet. Most men buy them because they offer a high degree of utility.

You know what I’m talking about, right? The ability to transport you from point A to point B while also hauling equipment around in the back.

If you are a tradesman, landscaper, or work construction, you already know these types of vehicles are invaluable.

But what if I told you that owning a pick-up also served as a babe-magnet? Would you think I’m crazy and maybe even dumb?

Well, believe it or not, there exists research to back this claim up. I’m not kidding you. In an article published on Forbes, data is presented that suggests women really dig guys who drive pick-ups.

In fact, per the cited research, pick-up trucks outrank sports cars (for their magnetic power) by 5 points. That’s kind of shocking when you think about all the money that has been poured into advertising by Lamborghini, Porsche and the like.

Going by the survey, which is admittedly a few years old, the man who drives a big black Ford pick-up is considered to be the most magnetic. Chevy is popular, too – but not as much as Ford.

So, does this mean if you are on the market (or looking to get some) that you should run out and buy a pick-up? The simple answer is: not so fast.

That’s because according to that same survey if you smoke and leave cigarettes in the ashtray, leave crap on the seats or play loud music, they count against you.

What’s that? None of these apply to you? That’s cool but still, I wouldn’t head out to a dealership just yet. What that survey failed to mention were other attributes that women find attractive in men.

Muscles, Money (and a Beard)

Specifically, I’m talking about guys who are also muscular and have lots of money. Don’t believe me? Head on over to Ask Men and read the research for yourself.

So, I guess that if you drive a (big) black Ford pick-up truck, like an F-250, and you are built like a brick sh-thouse and have lots of dough in the bank, you hit all the required magnet buttons.

Oh, and while you are at it, you might want to grow some facial hair (as a bonus) because, as it turns out, bearded men are also highly desired (see research).

All of this is to say that attractiveness is multi-factorial in nature. It’s never just “one thing” that makes someone sexy.

But if you are really looking to attract a mate, perhaps it’s best to ditch looking for an external prop and instead, turn your attention inward.

Here’s why – the thing people find most attractive, regardless of gender is confidence. This is one attribute that can’t be manufactured. You either have it or you don’t. Sure, you could “fake it”, but most folks can spot a phony a mile away.

The point is this. Pick-up trucks are cool. So are sports cars. But if you really want to vibe out masculine and rugged, save your money and start working on yourself.

Not only will you conserve cash, but you’ll also build an intrapersonal trait that will never go out of style. And you know what else?

Being a confident man also means you’ll won't buy a vehicle just to project an image. Instead, you’ll make that auto purchase based on your needs and lifestyle.