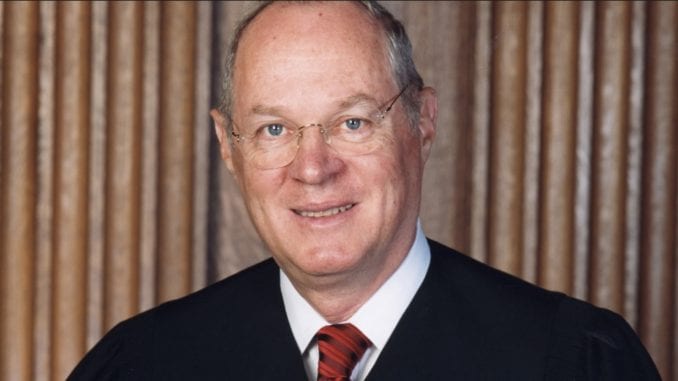 If you are living on planet earth, you’ve already heard the crushing news that Supreme Court Justice Anthony Kennedy is retiring.

There’s no way to soften it or pretend it’s not a big deal. It totally is. Kennedy’s departure from SCOTUS is TERRIBLE news for the LGBTQ community and will have serious ramifications down the road.

Out of all of the current justices, Kennedy – who was put on the court by Ronald Reagan back in 1988 – has been one of the only conservative judges who looked out for LGBTQ rights.

Specifically, we’re talking about important actions, like writing opinions that gave queer people in the United States marriage equality and striking down sodomy laws. He also voted against “special rights” restrictions that would have been harmful to our community.

This isn’t to say the man isn’t a conservative. He is. But at least we had hope so long as he sat on the court.

Now that he is stepping down, we have every reason to assume his replacement will be a hard-right winger. How do we know this? Because all of Donald Trump’s judicial nominees come from a list of ideologues that come right out of conservative central casting.

As USA Today put it, “All of them are overwhelmingly white, male and middle-aged. Most hail not from the East or West but from the vast midsection of the country — predominantly red or battleground states. Only half went to the nation's top law schools.”

GPB was one of the first LGBTQ blogs to urge the blockage of Neil Gorsuch when he was nominated by Trump in January of 2017. And as history has now shown, our concerns were absolutely warranted. Gorsuch is about as far right as you can get.

Here’s the deal. Conservative Republicans have always put a premium on seizing the Supreme Court with the goal of rolling back important civil rights.

Obviously, we don’t have a crystal ball and have no way of knowing how things will unfold. But we’re willing to bet many issues are now on their target list. LGBTQ rights being one of them.

We’re not trying to be negative but instead – real.

For those who are hoping that Chief Justice John Roberts will somehow turn into a “swing vote” – think again. He has been far to the right of Justice Kennedy. He also voted against marriage equality in 2015 and shared the following in his dissent.

“[T]his court is not a legislature,” he wrote. “Whether same-sex marriage is a good idea should be of no concern to us. Under the Constitution, judges have power to say what the law is, not what it should be.”

As an aside, let’s be real about things, OK? The GOP stole President Obama’s last SCOTUS pick by refusing to bring up Merrick Garland’s nomination.

And now, they are benefitting from their past bad acts “bigly”. Just look at the terrible decisions that have come out of the court this week?

Some on the left are now crying spilled milk and wishing they would have fought harder when Obama was in office to get Garland on the bench.

We hate to break it to you but it’s too late.

So, it is like this. We are in for a very bumpy ride. Will same sex marriage be around in 10 years? We can only hope. Is a woman’s right to choose in serious jeopardy now? You bet. And so are a list of other matters that many have taken for granted – until now.

Yes, queer America – all of us should concerned about Kennedy’s retirement. Big time.