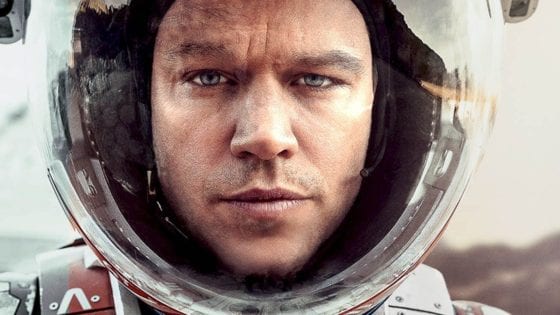 We decided to check out The Martian starring Matt Damon recently. How could we not? Given all of the fanfare around this flick, it just made sense. If you visit GPB, you already know that from time to time we like to watch movies and then share our reviews with you.

What follows are the general impressions that stuck with us upon reflection of this film. First, we’ll give you a basic rundown of the plot and try not to give away the candy store. That may sound impossible but we’ll try.

FYI: We are going to state here that this flick is definitely worth seeing and is one of those rare films where the movie experience lives up to the hype.

The essential plot of this movie involves astronaut Mark Watney being left for dead on Mars after a terrible storm causes the Aries crew to launch an emergency evacuation.

Having very few supplies, Watney must use his intelligence and imagination to stay alive. This challenge is psychological and physical, causing Watney to draw upon everything he’s ever learned about space travel in order to simply breathe. There’s lots of science in this movie but it’s not so heady that you can’t follow.

The Martian is an adaptation of Andy Weir’s book, which was a self-published novel released in 2011. It was then picked up by Crown Publishing in 2014.

There was a ton that we dug about this movie, including amazing cinematography and top notch acting by pretty much the entire cast.

The Martian isn’t one of those movies that takes forever and a day pull you in. Instead, it happens within the first 10 minutes of the opening. Think giant planetary storm, astronaut base and utter chaos.

And so what is great about The Martian is the movie’s ability to keep you constantly absorbed throughout the entire 144 minutes. The essential story is of human survival. We found ourselves rooting for Astronaut Mark Whitney and the entire NASA team.

We also liked how “real life” this film seemed to be. While the movie itself may be classified as science fiction, that doesn’t mean it wasn’t steeped heavily in astrophysics. In fact, producer Ridley Scott consulted with NASA when making this film.

The cinematography was fantastic and didn’t come off as cheap or fake. The movie makers either spent a lot of money on this area of production or used some type of ultra-modern CGI. Either way, everything looked realistic.

In this way, the movie was similar to what we saw in Star Wars: The Force Awakens.

Finally, we want to say that we thought Matt Damon did an amazing job in his role. It was obvious to us that he got into his character – which isn’t always the case for some actors.

When you think about it, Matt Damon has always had a thing for brainy, nerdy type movies.

Just think back to Good Will Hunting from 1997 and all of the movies he has been in that followed and it becomes apparent – Matt Damon is a real life geek (in a cool, likable way).

No movie is perfect and this is true of The Martian. There were a few scenes where we were scratching our heads. For example, how Whitney seemed to sport near perfectly coiffed hair, even though he had been marooned on the planet for weeks.

We also thought we would see his character lose a lot more body weight given the lack of food. It was easy to look past these issues however because the plot itself was more compelling.

Our biggest issue with the movie was the help the Chinese offered. While it might be nice to think that if one of our astronauts were stranded on Mars, it just seemed to be a stretch that China would come to the rescue.

We could be wrong though – who knows. Maybe in the future our relationship with China will be different?

Should you see The Martian starring Matt Damon? We think so big time. This is the type of movie that stirs critical thinking and makes you wonder about space travel.

As an aside, NASA badly needs a public relations boost to help with funding. At the time of this post, all of NASA’s future missions involve probes. But where are the manned missions? You would be hard pressed to find any.