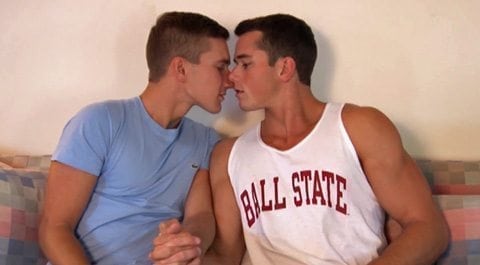 Apparently, that old adage, “He who protests too much” turns out to be totally true – particularly when it comes to homophobic men.

But don’t’ take our word for it. Instead, believe the research!

A recent study appearing in the Journal of Sexual Medicine found that guys with negative attitudes toward gay men (aka: homophobes) appeared to be way more interested in gay imagery than the other men in the study who weren't homophobes.

How the study was conducted?

Researchers from the University of Geneva asked 38 self-identified heterosexual men to take part in a survey that assessed feelings and perceptions about gay men.

That was part one of the study.

In part two, participants were asked to complete a visually driven computerized assessment known in the world of behavior science as a manikin task.

If you are thinking of a manikin, such as ones you might see in a department store, you have this right. But in the case of this assessment tool, “manikins” are the figures that appear on the electronic screens of assessment participants.

In the case of this research study, the “manikins” were gay and straight couples.

What did the research show?

According to the data, the homophobic men spent longer periods of time gazing at images of the gay couples than they did checking out the straight couples.

It turns out they could care less. They didn't look at the homosexual couples any longer than heterosexual ones.

The principle researcher, Boris Cheval, of the University of Geneva in Switzerland, shared with PsyPost that it may be difficult to tell how big of a role suppressed, same-sex attraction plays in the formation of anti-gay attitudes.

Here is an excerpt from the study:

“Findings on the viewing time allow understanding why some (but not all) men high in homophobia have a sexual interest in same-sex individuals,” the researchers concluded.

Related: Straight guys who say they aren’t gay but hookup with guys.

It is important to point out that both parts of the study contained small sample sizes. Obviously, more research needs to be conducted if we are to ever understand why some “straight” men seem to hate on the gays so much.

One psychological theory may help to inform what may be happening. Specifically, we’re talking about reaction formation.

What is Reaction Formation?

In a nutshell, reaction formation is a 25-cent term used to describe a subconscious defense mechanism whereby a person overcompensates as a way of hiding deeply held feelings.

Many people also refer to people who engage in the above described behaviors as hypocrites.