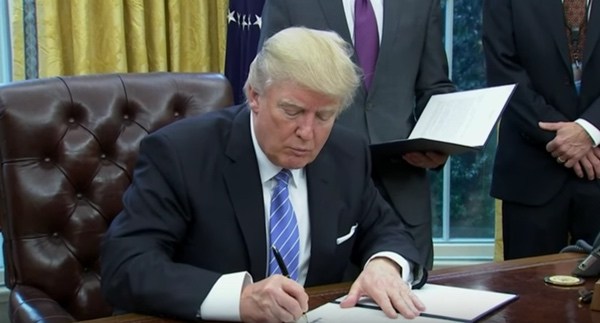 Politico has confirmed that Donald Trump will sign a “religious freedom” executive order on Thursday, per two senior administration officials. Previously, a draft of a leaked order came out in February.

“President Donald Trump has invited conservative leaders to the White House on Thursday for what they expect will be the ceremonial signing of a long-awaited—and highly controversial—executive order on religious liberty, according to multiple people familiar with the situation.

Two senior administration officials confirmed the plan, though one cautioned that it hasn’t yet been finalized, and noted that lawyers are currently reviewing and fine-tuning the draft language. Thursday is the National Day of Prayer, and the White House was already planning to celebrate the occasion with faith leaders.

The signing would represent a major triumph for Vice President Mike Pence—whose push for religious-freedom legislation backfired mightily when he served as governor of Indiana—and his allies in the conservative movement.

The original draft order, which would have established broad exemptions for people and groups to claim religious objections under virtually any circumstance, was leaked to The Nation on Feb. 1—the handiwork, many conservatives believed, of Ivanka Trump and Jared Kushner, who have sought to project themselves as friendly to the LGBT community. Liberals blasted the draft order as government-licensed discrimination, and the White House distanced itself from the leaked document in a public statement.

Pence and a small team of conservative allies quickly began working behind the scenes to revise the language, and in recent weeks have ratcheted up the pressure on Trump to sign it. The new draft is being tightly held, but one influential conservative who saw the text said it hasn’t been dialed back much—if at all—since the February leak. “The language is very, very strong,” the source said.”