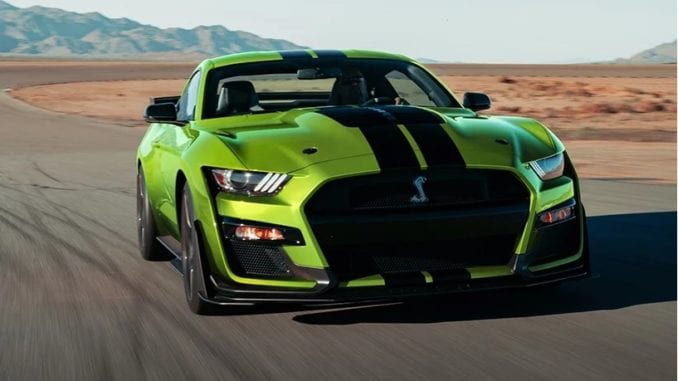 The Ford Mustang is in its fifth generation and the Shelby GT 500 is the fastest, most well-balanced Mustang ever built. The Shelby GT 500 has a supercharged V8 engine, a new chassis and suspension system that keeps all four wheels from losing traction on the road.

Style, speed, and handling – it’s all there with the 2020 Ford Mustang Shelby GT 500. Drawbacks – this is the most valuable player in a pricey game.

The Mustang Shelby used to be compared to the Chevrolet Camaro, but this new Shelby Gt 500 Mustang has skipped over its old rival and taken stabs at the new Corvette instead.  The 2020 Mustang Shelby GT 500 doesn’t perform like a traditional muscle car. It has transcended into the realm of true supercars.

The 2020 Shelby GT 500 will gobble up drag strips and racetracks with its supercharger. The new suspension dynamics make it easier to drive than its predecessors, preventing the tail end from kicking out sideways after every turn. Surprisingly, the heavy Mustang moves nimbly through each gear of the dual clutch transmission allowing for 8 millisecond shifts.

The 2020 Mustang Shelby GT 500 still has most of the same style points as previous models, but you’d be forgiven for needing a doubletake. Up front, the grille resembles the mouth of a predator fish just waiting to gobble up unsuspecting prey. It’s not just for style; these mesh openings help keep the engine cool and supply it with copious amounts of air.

An available carbon fiber track wing, racing stripe, front splitter and black top make the stock GT 500 look more like a custom mod. Plus, the cobra emblem in the front grille should make any would be street racers think twice about revving their engine next to this vehicle.

The 2020 Shelby GT 500 is the longest of the new Mustangs. It’s 190.2 inches long whereas the Mustang fastback is 188.5 inches. It’s also the widest new Mustang with a larger front and rear track width. It’s not a lightweight vehicle though. It weighs in at 4, 171 pounds. Thankfully, you can take some of that weight off by opting for the carbon fiber package, the track package. This shaves off about 90 lbs.

The steering wheel is firm and easy to hold onto since it’s wrapped in leather. The seats are leather trimmed with suede. The rear seats are 50/50 split folding to accommodate large luggage. An optional Bang & Olufsen premium audio system throws a subwoofer in the trunk. If you value speed over comfort, the 2020 Ford Mustang Shelby GT 500 does away with the rear bench all together when outfitted with the carbon fiber track package.

Not all Mustangs are created equal. At the base level, the 2020 Ford Mustang can be outfitted with an small EcoBoost powertrain. That muscle car has more visual appeal than power. The 2020 Ford Mustang Shelby GT 500 has a 5.2 Liter supercharged cross plane crank V8 engine that supplies power to the rear wheels.

It’s got visual appeal and power in equal measure. The supercharger in this vehicle is flipped upside down. The air intercooler is top mounted. This helps lower the vehicle’s center of gravity.

There are five different driving modes on the Shelby GT 500. In automatic mode, the DCT does exceptionally well at selecting the right gear for the moment allowing you to enjoy the ride. Yet, when placed in sport mode, the DCT has a bit of hesitation like a turbo lag. It’s better to use the paddle shifters and select manual mode. Other modes include track, drag strip, and snow/wet.

The Shelby GT 500 produces 760 horsepower at 7,300 RPMs and 625 pound feet of torque at 5,000 RPMs. This propels the Shelby GT500 from zero to 60 in just 3.3. seconds. In 10.6 seconds, the Shelby GT 500 can best a quarter mile. Simply put – it’s the fastest Mustang that Ford has ever constructed. If you compare numbers with the Chevrolet Camaro ZL1, the Mustang produces more than a hundred more horsepower.

Here’s a head to head comparison

One of the most impressive things about the 2020 Mustang is how well it handles. As you may know, Ford Mustangs and all rear wheel drive supercharged cars for that matter are plagued by spin outs. There’s just more power under the hood than the tires can manage.

In the case of the new 2020 Shelby GT 500, Ford automakers have equipped it with MagneRide magnetic shocks and new active dampening technology that keep the springs in a perfect balance of bounce and stick. The carbon fiber track package puts 20-inch carbon fiber wheels and Michelin Pilot Cup Sport 2 tires on the Mustang Shelby. Oversized Brembo brakes bridle the Mustang and bring it back down to earth in just a few seconds.

Fuel economy is one of the glaring weaknesses of the 2020 Mustang. It runs best on 91 octane fuel, but drivers will likely spend more time at the petrol station than any other place in the city. The 2020 Ford Mustang Shelby GT 500 exhausts 12 miles per gallon on city streets and 18 mpg on the highway. When you add up all the engine revving and burn outs, those numbers can drop down even lower.

Safety features on a Mustang this fast should be a priority, but they are conspicuously absent. If you want to be safe in a 2020 Ford Mustang Shelby GT 500 then you’d better be proactive and drive defensively. That’s easier said than done when you have 760 horsepower daring to break loose.

Luckily, there’s a full complement of advanced airbags in the Mustang including canopy, side and knee airbags. The vehicle can also be outfitted with a blind spot detection system that picks up pedestrians who fail to hear the roar of the Mustang’s engine.

The Dodge Demon might be faster on a drag strip, but the Chevy Camaro is no longer any competition for the 2020 Ford Mustang. The only thing Chevrolet has to offer at this point is their new Corvette, but it costs over a hundred thousand dollars to start and still might not be as fast as the 2020 Shelby GT 500.

With all the most desired options equipped, you could spend close to $100,000 on this Mustang. Performance tires, carbon fiber package, and style add-ons will run the ticket up before you know it. The Shelby GT 350 costs a bit less and it was built for street driving. It’s no less belligerent than the GT 500. It even has a flat plane crank V8 engine and manual transmission.

Also, you can opt for the cheaper turbo four cylinder Mustang and get a jolt of adrenaline every time you take the wheel. However, the 2020 Mustang Shelby GT 500 is the performance beast of the stable. For those who want the best muscle car on the track, there is no substitute.

Cost to own is quite high for this vehicle. It costs a good deal in fuel to drive pleasurably. Drivers will also get lots of attention from law enforcement that could result in pricey speeding tickets. Safety equipment is left out of the equation and so are the little creature comforts you’d find on a normal streetcar. But that’s not much of a deterrent for someone who wants the best Mustang ever produced. That’s the 2020 Shelby GT 500 in a nutshell.