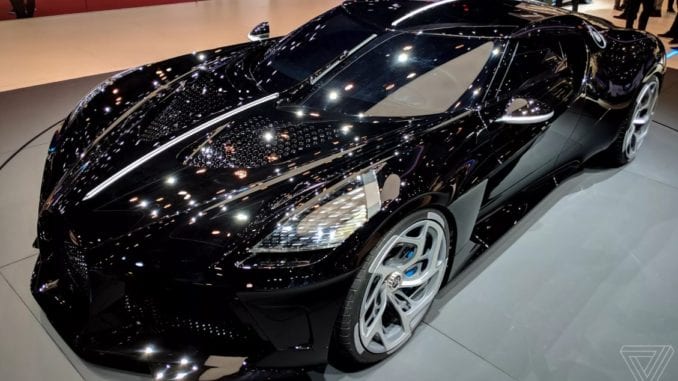 Would you buy the Bugatti La Voiture Noire?

Bugatti just unveiled the most expensive new car ever made. It has a price tag of $18.9 million dollars and it’s already been sold.

The Geneva Motor Show is the first major automotive expo of the year and Bugatti has stolen the show with its one-of-a-kind “La Voiture Noire “.

Bugatti also debuted a special edition Chiron Sport coupe dubbed the Chiron Sport “110 Ans Bugatti”, but all eyes were on the finely-sculpted bodywork of the black beauty.

Part of the appeal was the unexpectedness of the unveiling. Insiders and auto enthusiasts knew that Bugatti was planning something big to celebrate their 110th anniversary, but most people were anticipating the Chiron Sport variant, the limited edition Divo and perhaps a nifty video.

What they got was a one-off, luxury grand tourisme that has a 16-cylinder engine and one of the most aerodynamic body kits ever seen.

Diehard Bugatti fans might notice slight similarities between La Voiture Noire and the original Type 57 SC Atlantic coupe. Jean Bugatti owned a black Atlantic coupe, one of four, that mysteriously disappeared just before WWII and this new “black car” is a homage to that Bugatti legend.

“For Bugatti, ‘La Voiture Noire’ is more than just a reminiscence of the Atlantic. We are paying tribute to a long tradition, to France and to the creative work of Jean Bugatti,” says Stephan Winkelmann, president of Bugatti.

“At the same time, we are transferring extraordinary technology, aesthetics and extreme luxury to a new age.”

With only a single vehicle being hand-crafted, this hyper car represents the pinnacle of exclusivity.  Part luxury limousine, part super car, La Voiture Noire is sure to go down in history. La Voiture Noire looks like a mix between a luxury sedan and one of those futuristic concept vehicles that will never make it to the street.

It has an elongated front end that culminates in the signature downturned Bugatti nose. This almost gives it the face of an American muscle car. The long-look is reinforced from the silhouette view, as well. The Voiture Noire has a sleek, sculpted body with a sharp, angular cut along the profile.

The hood is the busiest aspect of the design with aggressive snorkels that would not seem out of place on a Batmobile.

The windscreen travels seamlessly back across the side windows and tucks into the rear of the frame like a visor in a futuristic helmet. The look is distinctively Bugatti, yet uncharacteristically smooth for a hyper car.

The body is made from carbon fibre and lacks any trace of exposed metal, other than the wheels. The dorsal seem that runs from tip to end evokes images of an undersea carriage for Aquaman. Bugatti designer Etienne Salomé described the vehicle in greater detail.

“Every single component has been handcrafted and the carbon fibre body has a deep black gloss only interrupted by the ultrafine fibre structure. This is a material that has been handled perfectly.”

Clearly, the impetus for the Voiture Noire’s design language was a modern take on the classic Type 57 SC Atlantic coupe, but the result transcends comparison.

“We worked long and hard on this design until [there] was nothing that we could improve. For us, the coupé represents the perfect form with a perfect finish,” Etienne Salomé continued.

If you want to know how this vehicle performs, then look no further than the 16 tail pipes in the rear. They give a hint into the power of the 16-cylinder powerhouse at this hyper car’s core.

Related: How Fast is the New Lamborghini Huracan Evo?

Given the delicacy of this vehicle’s creation and its one-of-a-kind status, it’s highly-unlikely that La Voiture Noire will ever get a track test. It’s built to conquer the road, but at a price tag of 17 million, it’s most-likely going to sit on the throne.

If we’re lucky, someone might catch a glimpse of it cruising down the streets of Saint-Tropez along the French Riviera.

One thing’s for certain: this hyper car is a unicorn.

What do you think of La Voiture Noire? Would you drop $17.9 million on a custom speeder?