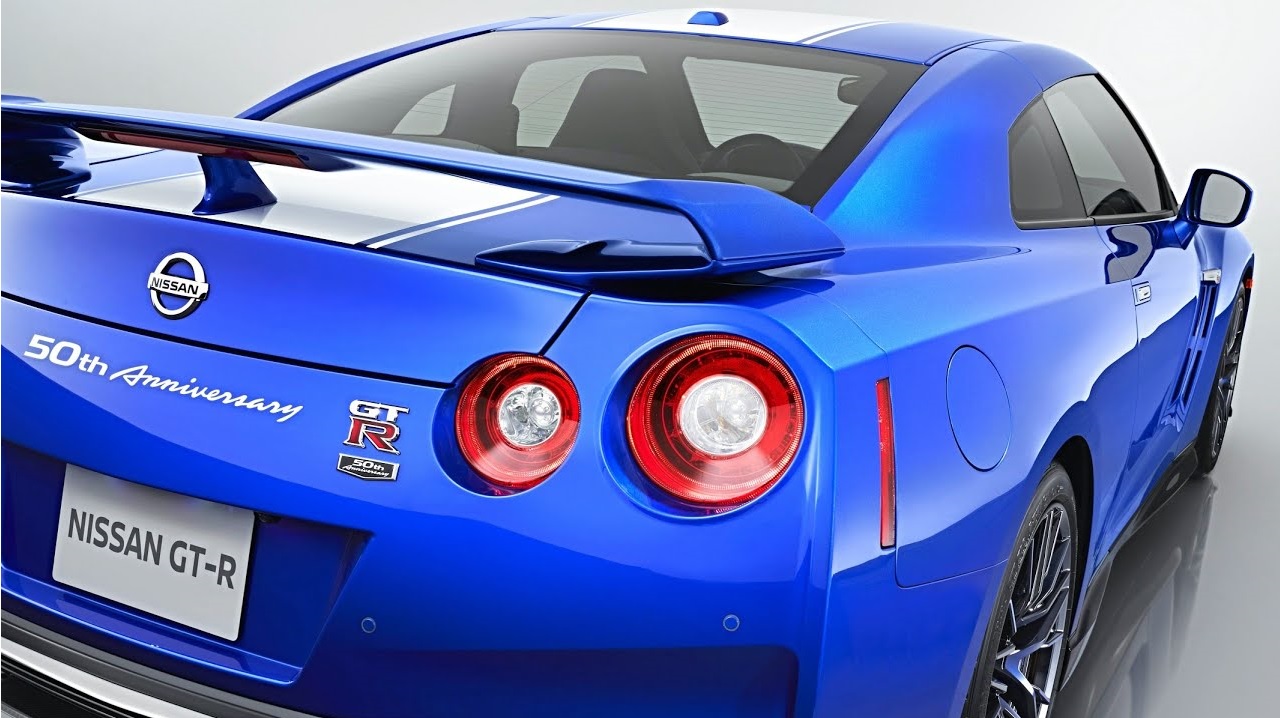 The Nissan GT-R is one of the most iconic supercars on the market. It’s been winning track races since 1969 and putting million-dollar supercars to shame in spectacular fashion. This year, the Nissan GT-R is celebrating 50 years of excellence with a special Anniversary Edition.

In a company press release, Nissan executives revealed just how important the GT-R is to their overall brand identity. “The Nissan GT-R has been the icon of our company's driving performance for the past half century,” said Shinichiro Irie, program design director for the GT-R. “We were highly motivated to ensure that the GT-R 50th Anniversary Edition stands out.”

The 50th Anniversary Edition will certainly standout to anybody who is familiar with the history of the supercar. The new GT-R has a wide racing stripe graphic that runs down the length of the hood, top and trunk. It pays homage to the 1971 racing GT-R that won over 50 competitions in Japan. That winning stripe is paired with the Bayside Blue paint palette, which is a throwback to the 1999 Nissan GT-R.

In addition to Bayside Blue, the special edition GT-R comes in Super Silver Quadcoat with white stripe and a Pearl White Tricoat with red racing stripe. There are new 20-inch wheels available with color accents to match each paint choice along with signature badges for the 50th Anniversary Edition.

The fun continues inside the cabin, too. The steering wheel and shift knob have a unique trim this year. There’s a new Alcantara headliner and an overall grey color scheme inside that adds a nice touch of refinement to the interior. The hand-stitched leather seats with 50th Anniversary logos are a thing of absolute beauty.

Here’s some eye candy from Nissan.

“While the exterior and interior changes may seem subtle at first glance,” explains Irie, “they're still impactful, especially with the new paint schemes, keeping the car's lines and overall presence modern and edgy.”

Performance Capabilities of the 2020 Nissan GT-R

The 50th Anniversary Edition Nissan GT-R somehow manages to squeeze more juice out of its aging V6 powertrain for 2020. Here’s a bit more information about the mechanical features of the special edition GT-R and the detailed rundown of the latest GT-R model specs.

The heart of the beast is a 3.8 Liter, twin-turbo V6 engine. It produces 565 horsepower and 467 pound feet of torque. The powerplant is managed by a dual-clutch six speed transmission that propels all four wheels (AWD).

The turbochargers have been tweaked slightly by incorporating a new type of seal technology. The results are stronger low range RPMs and a 5% increase in overall efficiency. The transmission has three driving modes, including a revamped “R Mode”. The R Mode gives you a slightly more aggressive shift timing to improve cornering.

The GT-R also has a new brake booster, new titanium muffler, and slight tweaks to the suspension and steering. Overall, these are very minor enhancements. When you get right down to it, the 50th Anniversary Edition doesn’t have any of its own unique mechanical upgrades.

In fact, it’s actually slower than the NISMO and Track Edition models. Those model trims get 600 horsepower, improved torque and sport tuning on nearly every major feature. If you’re looking for top tier performance, then look to those models first. The 50th Anniversary Edition is fast and powerful, but it doesn’t have the best equipment available for the GT-R platform.

Don’t expect a great deal of high-tech safety features on the 2020 Nissan GT-R. If you want to be safe, you’ll have to drive defensively. There’s no blind spot monitoring, lane keeping assistance, or pedestrian avoidance technology that you’ll commonly see on other vehicles.

You get more of a racing equipment set-up for the GT-R. There is a full complement of advanced airbags and the body of the vehicle has special crumple zones and energy absorption features built into the frame.

Grand Seiko Shares Their Anniversary with The Nissan GT-R

This limited-edition Grand Seiko watch has ceramic and titanium features that are painted Bayside Blue and a white crocodile leather strap to mimic the GT-R’s racing stripe. An 18-karat gold Nissan 50th Anniversary emblem is located on the case back and the stop watch feature can run for 12 hours straight. Only 200 units will be produced, and each watch carries a $24,000 price tag.

With its Spring Drive chronograph caliber and a ceramic case, this watch is at the leading edge of sports technology. The stopwatch measures elapsed time for up to twelve hours: the perfect caliber with which to celebrate the twin anniversaries of Spring Drive and the NISSAN GT-R. #SBGC229 #GrandSeiko

Can you see the similarities between the 50th anniversary edition 2020 Nissan GT-R and the limited-edition Grand Seiko watch?

You can wrap a piece of history around your wrist by visiting the Grand Seiko website or you can find the limited-edition GT-R Grand Seiko watch on Amazon.

The Future of the Nissan GT-R is Still Uncertain

Most people believe that the Nissan GT-R is nearing the end of its tenure. Afterall, the sixth generation R35 hasn’t changed much since 2007. Its gasoline powertrain has been fully realized with the 2020 model, but the market for automobiles is rapidly changing and evolving away from gasoline engines.

Will there be an all-electric GT-R in the future or even a hybrid version?

Fans of the GT-R would love to see a next generation Godzilla, but the future of the GT-R is still uncertain. Carsales caught up with Hiroshi Tamura at the Australian release of the GT-R 50th Anniversary Edition and asked him about the Nissan GT-R platform moving forward.

“I have it in my mind, but not for outside. So, nobody knows. I cannot tell you,” said Tamura. “But I can say, imagining for a next-generation [car] is already in a chat. Talking about the solutions.”

He’s keeping his cards close to his chest. The issue at hand has to do with the underlying technology. The GT-R is powered by a twin-turbo V6 engine. Respectfully, a decision on a new powertrain for the GT-R is above Hiroshi Tamura’s paygrade.

Related: Check out this Bell and Ross skull watch

Nissan corporate executives will have to decide if mechanical changes to the GT-R will work with their global sales strategy. Transitioning to a hybrid or electric system could harm brand identity. On the other hand, keeping the GT-R platform without any further mechanical modifications could effectively turn Godzilla into a dinosaur.

Chief product specialist Hiroshi Tamura still believes in the current version of the GT-R. In an almost Zenlike statement about the current Nissan GT-R, Tamura said, “Yes, R35 is long [in terms of age]. But for model year 2017 it is almost a new body shape. The body is technology.”

“A GT-R is about total balance management,” said Hiroshi Tamura. “It is not about chasing a power figures, but creating a new GT-R, where no aspect has been overlooked. This is appropriate to celebrate the GT-R 50th anniversary.”