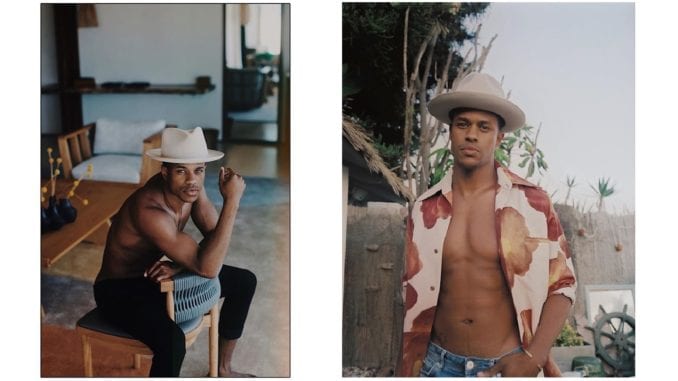 Jeffrey Pope is a rising star in Hollywood, and that’s left us with a few questions. Who is he? Where did he come from? And what are other fun facts about him?

Earlier this week, the trailer dropped for the upcoming Netflix show Hollywood. Created by elite Hollywood producer Ryan Murphy, the show celebrates the legacy of Old Hollywood while also attempting to revamp the iconic entertainment landscape of the past. Hollywood follows many wannabe stars as they try to make their way in the entertainment business. That also includes a gas station run by Dylan McDermott’s Ernie. The thing is, Ernie’s gas station is actually a front for a very different business. When are car pulls up, one of his employees will jump in. The man will then have some fun with whatever clientele (Patti Lupone, Jim Parsons, Darren Criss, and more) rolls along.

Among one of those many famous names is one Tony-nominated actor just on the brink of public success and recognition. But who is Jeremy Pope? If you want to know, check out the seven facts below.

#NEWLOVE official music video out on VEVO & YouTube!💥 __ check for the single in the film STEP SISTERS out on Netflix

1. He Has A Religious Background

In the early 1990s, Jeremy was born to a pastor’s family. This meant he was surrounded by the Christian faith and community. That affected him greatly for the majority of his life. Not only did he attend church frequently, but he even sang and eventually led the youth choir at his church. In fact, that’s where he developed his love for music.

2. He Went Against His Parents' Wishes

After he discovered his love of music and singing, Jeremy Pope decided to pursue it as a career. While his parents initially supported the idea of Jeremy getting into the entertainment business, their desire was for him to become a Disney star. Instead, he chose to enjoy his childhood through signing up for sports (he was in his high school’s track and football teams) and theatre club (he performed in Cats one year).

Eventually, Jeremy decided to go to New York to attend an arts college (the American Musical and Dramatic Academy). His parents were not happy. He then later received an offer for a Royal Caribbean performance job, but he declined it. Again, his parents weren’t happy.

But you know what? It’s a good thing that Jeremy Pope didn’t listen to his parents, because he ended up being successful in New York City. Last year, Jeremy played the lead role in his Broadway debut for the play Choir Boy. After that show closed its limited run, he moved onto Broadway’s Ain’t Too Proud production.

For his Broadway roles, Jeremy Pope was nominated for two major awards. He gained a Tony nomination for Best Actor at the 2019 Awards. He then also received a Grammy nomination in the category of “Best Musical Theater Album” for Ain’t Too Proud. Not too shabby!

Not only is Jeremy Pope known for playing a gay lead character on Broadway, but he has openly discussed being attracted to both guys and girls. Though, he chooses not to label himself as bisexual or pansexual.

5. He Had A Tough Childhood

That said, being sexually fluid in a religious family and conservative community was not an easy task for Pope. It left him with a lot of questions. As he told LGBTQ news source them. last year:

“Freshman or sophomore year of high school, I was dealing with my sexuality and what that looked like. I hadn't really explored with other guys, but I had been with girls and I remember that it was more like, I think I like both. What happens if you like both? What does that even mean?”

He later added that a change of scenery helped him to grow.

“It wasn't until I moved to New York and I was alone that I started to identify who I was and what that looked like. What I had to say, my own opinions, my own beliefs on religion, on sexuality, on the way the world worked and the art I wanted to do.”

But now, Jeremy Pope has moved New York City theatre to the tv and movie business of Hollywood. Even better, he’s already made a good connection with a very powerful producer.

Again, Pope is getting ready for the release of Netflix series Hollywood by Ryan Murphy (Glee, American Horror Story, American Crime Story, and Pose). Speaking of that last show, Pose,  Pope has recently signed on to join the third season.

It seems Jeremy Pope has made a fine friend/contact in Ryan Murphy.

With all of that entertainment experience under his belt and future project set ahead of him, it looks like Jeremy Pope’s path is pushing forward and upward. Currently, the actor’s net worth is estimated at around $300 thousand, but we expect that amount, and Jeremy Pope’s fame, to raise higher in due time.