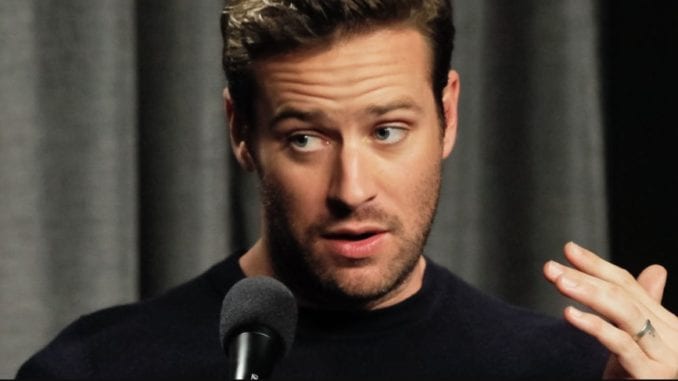 Apparently, Armie Hammer has a pair of seriously massive balls. And no, this isn't some metaphor about him being bold – as in “that dude’s got balls” scenario.

Instead, we're talking about Armie Hammer’s nutsack being so large that film producers had to digitally remove aspects of them during post-production changes in his new film, Call Me By Your Name.

The edits happened mostly when he wore a pair of “short-shorts” during the filming. You know what those are, right? The skimpy type with a high cut around the thigh that reveal certain … things.

This past Monday, Hammer stopped by Andy Cohen's studio at SiriusXM along with director Luca Guadagnino and castmates Timothée Chalamet and Michael Stuhlbarg.

During the chat, the discussion took a turn to ball-talk. Specifically, that Hammer had trouble keeping his massive nuts from pouring out during filming.

“There was a few times where they had to go back and digitally remove my balls from the movie,” Hammer shared with a laugh. “They were short shorts—what are you gonna do?”

And Guadagninio verified the claim by adding, “It’s both things.”

Cohen, who was genuinely at a loss for words over the surprise revelation, added, “Short shorts and big balls is what you’re saying? Wow.”

The cast joked that Hammer’s nuts weren’t erased forever, but rather digitally removed then added somewhere else in the scene. “If you look carefully at all the trees, it’s not all peaches,” Hammer said.

Hammer can rest assured that he isn't the only man to have struggled keeping his junk inside a small pair of shorts. One only needs to look to look at Jozef Urban, the Slovakian runner who finished the Košice Peace Marathon with his twig and berries hanging out of his shorts.

And hey -Chris Evans has shown his largeness in many different ways, too

Maybe producers should leave Armie’s balls the way they were. It’s not like it would hurt the movie with audiences.