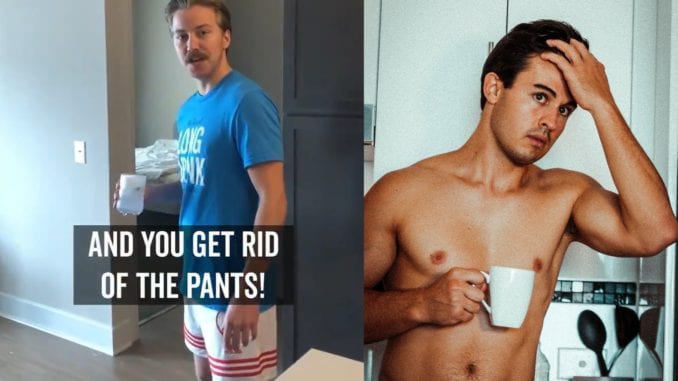 Is it time to drink in your underwear?

There are many traditions out there that we should celebrate more often. The Egyptian’s way of celebrating their pets, the Romans' way of honoring their male mentors and friends, and the Finns’ ways of drinking while wearing as little clothing as possible.

In terms of the latter, Ask Men and actor Miles Teller brought the tradition to our attention. You see, it seems that in Finnish tradition, men would drink at home while wearing only their underwear. This tradition is called “kalsarikännit,” which can be loosely translated into “pantsdrunk.” When you think about it, this makes a lot of sense. After all, Finnish people spend most of the year indoors thanks to their environment being so incredibly cold.

The tradition of pantsdrunk is so ingrained in Finnish culture that they even have governemnt recognized emojis about the practice. In addition, there are internationally-translated texts that describe the tradition. Seems like generations of Finnish men have been drinking in their underwear at home!

Learn how to social distance like the Finns! Kalsarikänni or “Pantsdrunk” (google it). Tag us to a post with the Long Drink at home with the hashtag #pantsdrunk, and we will donate $10 to the Bartenders Guild for each post, up to $50,000. pic.twitter.com/eDaMkjgky2

But again, this tradition didn’t just reach our Western eyes and minds just randomly. It was actor Miles Teller (Whiplash, Fantastic Four, Top Gun: Maverick, War Dogs, and more) that brought it to our attention. While in Finland last year, Teller ended up becoming the co-owner of Long Drink, a citrus soda blended with gin and branded as “Finnish Fuel.” In order to market the drink, Teller and his company have tried to celebrate the Finnish tradition of pantsdrunk.

According to Mikael Taipale, co-founder of The Long Drink Company, “[Kalsarikännit] means that you're drinking at your home without any intention of going out … and you get rid of the pants.”

Honestly, this tradition sounds like a whole lot of fun, and we imagine there’s already a lot of people participating without realizing it. So as we are all stuck in our homes anyway, we might as well do it like the Finns and get pantsdrunk! Here’s to safe and responsible drinking, men. And without our pants too!