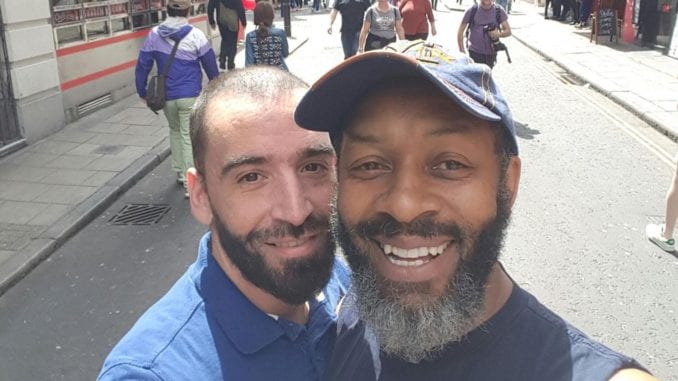 A theater director is reporting that he was kicked off a public bus after the driver launched an extremely vile, racist and homophobic attack at him and his boyfriend.

Omar Okai shared with the Evening Standard that the experience was “humiliating”. Apparently, the incident occurred after he had enjoyed an evening out with his man in central London this past Friday.

Okai said the couple felt “shocked and disgusted” after the bus driver challenged the couple with nasty homophobic remarks after they boarded the bus from the rear.

The 51-year-old gay man from Bethnal Green, said that the bus driver told them: “I bet you like it in the backdoor” during a discussion near Tottenham Court Road station.

Okai and his Spanish boyfriend, Juan Salas Carranza (36) have filed a formal complaint with the Transport of London and the city’s police over the alleged incident.

“We put our hands out to get the bus but he looked at us and pointed at something and just drove on,” Mr Okai told the Standard.

“We caught up with the bus at another stop. The front doors were closed but people were on the bus. The back door was open so we got on and go straight to the front and put our Oyster cards on the machine.

“He then said, the front doors were closed for a reason. We apologized and said ‘but we have paid, is it ok?’

“He just kept repeating, ‘how long have you been using buses in this country?’ I made it very clear I am British but he kept repeating it. It was really aggressive, it was vile.

“He then said, ‘why did you use the backdoor?’. We again apologized and he said, ‘I bet you like it in the backdoor anyway.’

Mr. Okai goes on to share with the Standard:

“He then pressed the button on the top of his bus panel and made this announcement. He said ‘this bus is not going any further and people need to get off'.

“It was in such a nasty way. We got off the bus but realized other passengers stayed on. He then opened the front doors and allowed another lady to enter and then he drove off.”

Mr. Okai, who runs and operates his own theater company, said: “You don’t have to call me a poof and a queer to be homophobic. This on a bus in your own country in 2016, that’s disgusting.”

The Transport of London is investigating the matter.