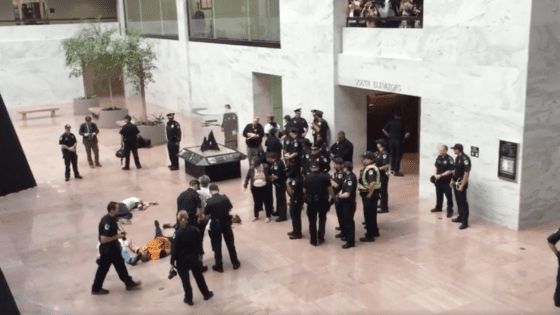 Gays Against Guns Held A “Die-In”

The Gays Against Guns (or GAG) group was founded last year after the dreadful Pulse nightclub shooting in Orlando, Florida.

Since then, the organization has gathered new members in order to shine a light on the many victims of gun violence.

“Gays Against Guns NY is an inclusive direct action group of LGBTQ people and their allies committed to nonviolently breaking the gun industry's chain of death—investors, manufacturers, the NRA and politicians who block safer gun laws.”

More: Gay Utah Couple Among The Victims Of The Las Vegas Shooting

In October, the GAG held a demonstration in Times Square after the Las Vegas shooting. The protest included figures shrouded in white to represent the many killed in the violence.

“America woke up this morning to news of yet another mass shooting,” the group said at the time. “Gays Against Guns knows one thing—It is up to us. And by ’us’ we also mean you. Come join us. We have plenty more to do.”

Now, the organization is reacting to the recent shooting in a Texas church by holding a “die-in” protest.

Posted by Gays Against Guns on Monday, November 6, 2017

This isn’t the first time that the organization has held a “die-in” protest. They did so at New York Pride and at the Lincoln Memorial too. Plus, theyv’e also held puppet effigies to represent how Congressmen are puppets of the NRA.

It seems the Gays Against Guns will continue in their efforts to help their message be heard.