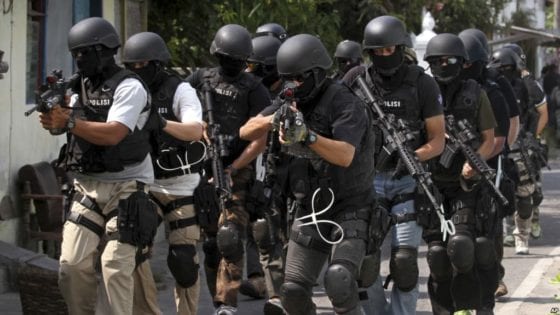 GPB has learned through various news sources, including Gay Star News, that Indonesia plans on launching a massive crackdown on its LGBT citizens.

Despite homosexuality not being illegal federally, if private, consenting and non-commercial, the most recent arrests are under Islamic law in the Aceh region of the country.

The plan to go after LGBT people was hatched after the West Java police chief Anton Charliyan stated on Tuesday that the decision to launch the crackdown came after caning of two gay men and arresting hundreds of others on a raid of a Jakarta gay nightclub.

The police chief also stated at a press conference at the West Javan capital of Bandung that gay people suffer a “disease of the body and soul”.

The area has an estimated population of 46.1 million people, according to census reports.

Pitting people against one another and treating gay people like they are animals, the police chief also urged citizens to report any activities seen involving LGBT persons.

“I hope there are no followers in West Java, no gay or LGBT lifestyle or tradition,” Charliyan said.

“If there’s anyone following it, they will face the law and heavy social sanctions. They will not be accepted in society.”

Mr. Charliyan went on to describe how police will be used undercover as part of a “taskforce”, used to go after gay people attending “secret parties”.

A national Indonesian police spokesperson said that the taskforce is not a national strategy in the country.

“Police have a mandate to follow the law. They are not the morals police,” said Yuli Rustinawati, chairperson of Arus Pelangi, an Indonesian LGBT activist organization.

As Pink News pointed out:

“Anti-LGBT discrimination is said to be costing Indonesia as much as $12 billion every year, according to a recent study.

The losses are a result of barriers to employment, education, healthcare, as well as “physical, psychological, sexual, economic and cultural violence” suffered by LGBT citizens.

France has been urged by human rights groups to put pressure on Indonesia to do more to protect the rights of LGBT+ people.”

GPB urges the Trump administration to immediately speak out against the actions being taken in Indonesia against LGBT persons as well as the ongoing purge of gay persons in Chechnya.