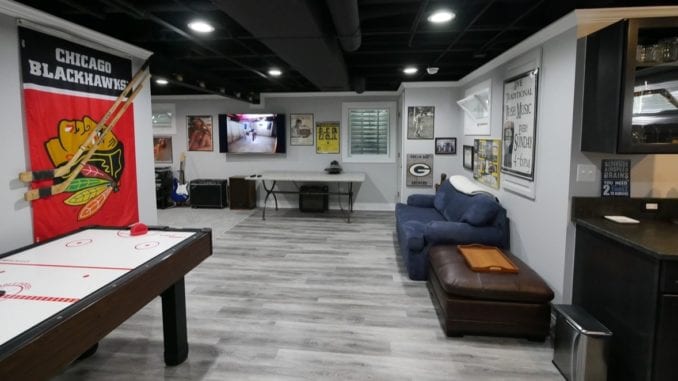 Do you ever just want to get away from it all? Or maybe you just really, really love the 49ers? Some people might not like the idea, but when a man needs to let his hair down, he heads for the man cave. Is it still okay to have one and what are the man law rules for setting one up?

Do We Still Need a Man Cave?

It’s debatable where the term “man cave” came from and when it was first used. The most recognized instance was in the 1993 book by John Gray entitled “Men Are From Mars, Women Are From Venus”. There was a passage in the book that noted, ““Men go to their caves ..Women talk.”

Gray went on to write that men use their caves to forget about their problems by reading the news or playing games. His book alludes to the almost primal need that the man cave serves – the need for isolation. It’s the break room from being a fulltime working, skull-cracking, hunter and provider.

Some people argue that the very idea of a man cave is immature, sexist, outdated and reeks of toxic masculinity. This viewpoint is largely led by feminists, but it is becoming more mainstream. The idea that men need to retreat from their partners and have a space that is only dedicated to “man things” seems to be losing validity in a modern world.

In a traditional relationship, the man would work all day and the woman would be the caretaker of the home. She would decorate the house. This left the man with a desire to create a separate, smaller part of the house that was unfouled with frilly throw pillows and other decorations that he couldn’t care less about.

Relationships have changed, haven’t they? What about a gay couple? Do they still need man caves? Do they each need a separate man cave? What is the purpose of a man cave if the man isn’t the breadwinner of the family? Does he still merit a private space for decompressing, even though he’s Mister Mom?

Maybe the man cave represents something eternal that transcends sexual preference and societal norms. Some might even call it a sacred space. When absent – it is glaringly missing. When present – its value is priceless.

However, to fully understand the allure of a man cave you need to consider its purpose. The man cave isn’t just a place to belch, fart, drink and watch football with your bros. Something important is taking place here in the male psyche.

Most guys create a man cave after pivotal moments in their lives such as divorce or their kids going off to college. This is the most socially accepted time to create a man cave. All of a sudden, you’ve got extra time, space and a vacuum of responsibility. So, now you can devote more of your energy to your own passions.

Some men want to create a man cave when they get married, move in with their partner, or take possession of a new home. For these men, the man cave serves as a safe zone or a way of marking off restricted territory.

Essentially, it’s protection against losing what you loved so much about your previous phase of life as you move into the next. This urge is less about passion and more about the fear of change and the unknown. Most men just work past it.

Nonetheless, the allure of having a man cave is universal. It doesn’t depend on age or your individual life circumstances. As we’ll discuss later, most man caves are built around a passion or a purpose. So, you only really need to have an interest to have a purpose-built man cave.

What Are the Rules for a Man Cave?

Most men like to have their own space, but not all men can afford one. You need a spare room and some time away from your obligations. You should never take space from someone else to set up a man cave or neglect your responsibilities. Build an add-on to your home or repurpose an existing room. Spend only your nights or your weekends there. Don’t let it become a permanent retreat.

You should also clearly set up some ground rules about who is allowed inside your man cave and when. If you want peace in your home, then you’d better let your partner come into the man cave from time to time. They probably just want to satisfy their curiosity and make sure you’re not getting too weird down in the basement.

Your man cave is supposed to replenish your spirit and relax your body. Don’t let it deplete your wallet instead. Some guys can get a bit obsessive about their man caves and stock it with all sorts of rare and expensive items. It’s best to build it up over time to avoid blowing the bank.

Related: How to Effectively Set Up Your Home Office

Man caves usually follow a theme. Since man caves are almost entirely devoted to a man’s hobby or favorite leisure activity, his man cave will inevitably follow a certain aesthetic. You’ve got video game rooms, places to work on cars, rooms for watching Monday night football, and many other styles of caves.

Here are just a few examples:

When most people think of man caves, they think of sports. The sports cave is where men hang their memorabilia, watch the big game, and entertain friends. Traditionally, men didn’t want to drink, smoke, and get loud in the same place that their wives and children entertained their guests.

So, the sports cave was born.

Imagine a room with toys that never get opened, comics that never get read, and posters of half-naked anime women. Yep, that’s the standard nerd cave. It’s a shrine room dedicated to geeky, adolescent artifacts. Some men are a bit embarrassed to show off their nerd caves because they just aren’t as socially accepted as the sports caves.

It’s your cave, boys. Nerd it up if you like.

You don’t have to call it a cave, but a dedicated fitness room has become part of many households. What makes your workout room a man cave is when you turn it into a sacred space. A fitness cave is for iron addicts and CrossFit bros who don’t mind chilling in their caves even when they’re not banging out reps.

You can even start a membership program.

Video games are big business. They have larger-than-life characters and a cinematic quality that rivals big budget Hollywood movies. It’s only right that you should get the best big screen TV display and sound system to enhance your gaming experience.

Related: Everything You Need to Know About Wine in One Lesson

Are you the type of guy who would buy a Sega Genesis just to play the original Altered Beast? Then, you might want to create your very own gaming cave.

Maybe you’re the quiet type who wants a dedicated space for intellectual retreats and moments of deep reflection. Then, you need a study cave. The study cave is a personal library on steroids. It’s got plush couches, a vintage coffee machine, and somehow, you’ve managed to pipe that old book smell directly into the central AC unit. Just try not to become a comic book super villain in there.

Preppers are guys who always want to be ready for the apocalypse, any type of apocalypse. The prepper cave is filled with emergency provisions and maybe even some cool doomsday weapons. You might never need them, but it makes you feel good to know it’s all there.

A prepper cave might also have artifacts and memorabilia from past wars and conflicts. In this sense, the prepper cave crosses over into the military collection genre from time to time.

For most men, the auto cave is their home garage. It’s a sacred space born out of necessity, but you can always push the envelope. An auto cave might have a wealth of tools and spare auto parts.

It can sometimes rival a big automaker’s service center, especially if you throw in a car lift. Some auto caves even have elevators to house the priciest supercars in the world.

The man cave doesn’t have to follow a theme. In fact, most men appreciate certain elements from all these different themes. That’s why you can have a freestyle cave that borrows from all the other styles.

A freestyle cave takes everything that you’re personally interested in and puts it in one sacred space. It’s a custom room that showcases your personality and extravagances like King Tut’s tomb.

Nobody does it quite like celebrities. Take a closer look at Terry Crews’ freestyle man cave.

Lots of guys work in the creative arts. You can make videos, photos, music, and animations all from a single studio space. This type of work is born out of a man’s creative passions and talents. So, having a studio cave makes sense. Work and leisure come together.

This type of man cave can actually make you some real money. However, the trade-off is that you could get sucked into this place like a hyper-caffeinated vampire.

Are you a man who likes the finer things in life? Have you ever spent a hundred dollars on a cigar? Then, you’re probably a connoisseur, a person who appreciates the highest quality in everything. You need a place to enjoy your one-of-a-kind whiskey in peace.

The connoisseur cave is lavish, opulent and celebrates the many accomplishments you’ve made in life. Go on, kick back, and treat yourself like a king.

Maybe a day will come when man caves are a thing of the past. Yet, having a space where a man can regulate his emotional and psychological needs is vital to the stability of a household.

The man cave serves that purpose.

One of the most important things to remember about setting up a man cave is that you shouldn’t compromise or apologize for what goes into the space. It’s your man cave. So, if you want to hang posters from cult classic movies you saw at the movie theater as a teenager, then that’s just what you’re gonna do. The only rules are the ones you set.