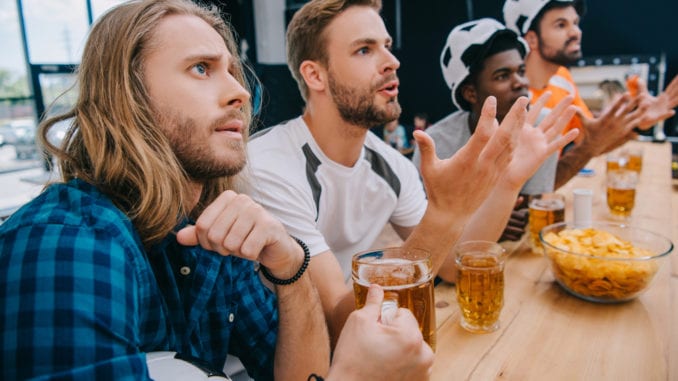 According to a new study published in the journal Communication and Sport, watching team sports with friends can have mood lifting benefits, even if the team you are rooting for doesn't win.

Men’s Variety spoke to licensed psychotherapist Costa Provis in Chicago about the research to gain his impressions. “The results [from the study] are really interesting and should be good news to people everywhere who watch sports. What’s most fascinating is how the act of being social influences mood,” says Provis.

“Just feeling connected to others while watching the game helped sustain self-esteem,” shared Dr. Silvia Knobloch-Westerwick, a co-author of the study and a professor of communication at The Ohio State University.

The winner of the game was Michigan with a final score of 17-14.

Just prior to the Saturday game, researchers asked participants to rate their mood, self-esteem and other areas related to self-perception. They were also questioned the next day and the following Monday.

Here’s what investigators discovered. Before the game, students from both schools had similar thoughts about their self-esteem when asked to rate their body, appearance and academic abilities.

But when researchers questioned participants on the Sunday after the game, Michigan fans had much higher levels of self-esteem. Moreover, those same students saw their self-concept rise even more on Monday.

You are probably thinking the Ohio State students self-esteem tanked, right? Think again. According to the research, their self-concept didn’t change much at all. In fact, in some cases, it increased.

Now here is the catch. The study revealed that “how” and “if” the game was viewed mattered.

Students who watched the game socially (meaning with friends) were more likely to experience mood-lifting results, regardless if their team won or not. Those who didn’t watch (or did so alone) experienced a mood drop.

The reason is simple. The game was a major conversation topic in the days following the event. The winners celebrated with one another while the losers offered each other emotional comfort.

And the folks who didn’t watch the match or did so in solitude? Their mood dipped because they struggled to participate in conversations about the outcome.

“You want to be in this with other people. Winning or losing, it is better to be a fan with your friends,” suggests Knobloch-Westerwick.

Provis, the counselor from Chicago, agrees.

“It’s all about the shared moment. When you experience something similar with people who are close, it has a way of positively influencing perceptions – including perceptions of the self,” Provis says.

Well, there you have it, folks. Watching sports with your buddies can lift your mood, even when your team doesn't win.

Do you hang with your buddies to watch games? What impact does it have on you? Share your thoughts in the comments area below.