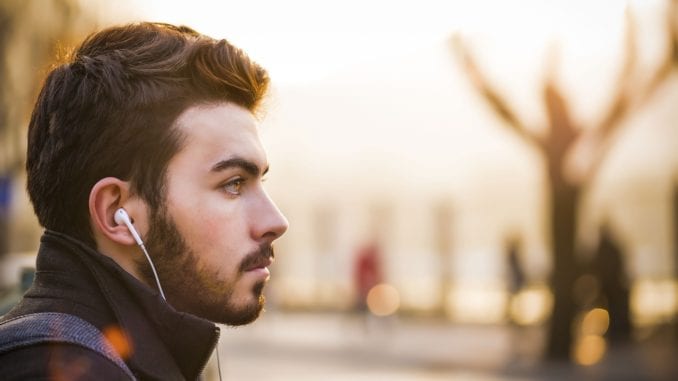 Forget alpha males; there’s a different male personality type that’s sexy, assertive, and thoughtful. The sigma male is sort of a lone wolf, but he’s the type of man who has all the qualities of a great leader. He’s confident, patient, and helps his allies when needed.

The sigma male doesn’t constantly need attention like the typical alpha male. He isn’t passive like a beta either. The lone wolf is mysterious and he’s happy to inhabit the fringes of society until the spotlight suits his ambitions. Learn more about the sigma male and other masculine personality types.

Where Do Male Animal Archetypes Come From?

The whole paradigm of alpha males, beta males and sigma males is drawn in part from evolutionary psychology. We see this social hierarchy at play in the animal kingdom. It’s based on the roles these different individuals inhabit within their own social construct.

So, you have this dominant leader type, the alpha, who is more aggressive, possessing of favorable traits for survival, and therefore sits at the top of the mating chain. His genes are the most likely to be passed on to future generations. Then, the beta male types come second in the hierarchy. They are subservient to the alpha and don’t like conflict. Beta males are sensitive and cooperative.

In the latter half of the 19th century, anthropologist, primatologists, and zoologists started using the terms “alpha” and “beta” more frequently. Scientists were talking about alpha chimps way before they were referencing alpha wolves. They saw similarities in the way lead primates behaved and the way that leaders in the business world behaved.

Neil Strauss’ The Game (2005) was probably the tipping point for using the term “alpha” to refer to men. In the book, Strauss learns how to become more confident by studying game with a male pickup artist named Mystery. Strauss was able to use Mystery’s pick-up techniques to transcend being a beta and become a true alpha male.

Beta males have become trendy in recent years and they’ve carved out their own social niche. You can be quirky, geeky, and even passive and that’s perfectly normal. Yet, there’s another male archetype that is on the rise and that’s the sigma male. He’s the male archetype that embodies the greatness of alpha dogs and the multi-faceted personality of the beta.

The sigma male is most commonly referred to as the lone wolf. One of the best examples of the sigma wolf comes from “The Rise of the Black Wolf”. It’s a 2010 National Geographic documentary that followed a lone wolf in Yellowstone National Park. The black wolf in the story took over a wolf pack in the most characteristically sigma way – by stealing all the mates.

What Are the Main Traits of a Sigma Male?

The sigma male is the prototypical lone wolf. He is the shadow of the pack. He is cunning, intelligent, and mysterious. The sigma doesn’t require companionship from fellow members of the pack unless they are romantic interests or short-term teammates. The sigma socializes for a reason, not because he fears being alone.

The sigma male might have friends, fellow lone wolves, but his circle is rather small. Usually, the sigma male forms limited confederations – partnerships with a time stamp. In other words – “let’s achieve a goal together and then see what happens.”

The sigma male has potent sexual energy and animal magnetism. He can steal away the hearts of nearly anyone he sets his eyes on and that makes him a natural enemy of the alpha male type. Afterall, the alpha won the right to romance through his dominance. So, he conflicts with sigmas who can turn a mate through charisma.

Sigma males can be leaders, but it’s not their preferred role in the social hierarchy. In business, a sigma male might get brought into a company to perform an executive role. He rarely gets promoted from within. The sigma business leader models the behavior he wants from his workforce and promotes personal responsibility in everyone underneath him. The alpha CEO is quite different. The ultimate accountability rests on his shoulders because he’s the head of the chain.

The sigma male doesn’t like long term commitments. He’s goal-oriented, even in his personal relationships. He’s an amazing lover, but don’t expect the sigma male to stick around for very long. He’s bound to seek a new challenge or find a new cause that needs his particular skillset. You can stick with him, but he won’t stick with you.

Sigma males tend to clash with alpha males like oil and water. The sigma is never afraid to challenge the alpha’s dominance but is just as likely to lose interest and walk away. Alpha male types value a strict social hierarchy that places them at the top. Sigma males reject societal rules in general. An alpha might say, “I just don’t get that guy.”

Although the name “sigma male” might be relatively new, lone wolf personalities certainly aren’t novel. Some of your favorite characters from movies are sigma males. There are Hollywood elite sigma males and celebrities who embody the sigma male archetype.

Perhaps the best example of a sigma male from movies is James Bond. The British secret agent 007 mostly works alone, but he can seduce anybody with his charm. He takes charge in the heat of the moment and doesn’t back down from aggressive challengers. James Bond has a mysterious past and lives by a code of secrecy.

You can also include John Wick in the ranks of sigma male movie characters. He was an orphan with a troubled past. He finds a way to survive despite overwhelming odds against him. John Wick also doesn’t seek attention from others. He’s focused on his ambitions for revenge and everyone else interacts with him as their paths cross.

John Wick is played by Keanu Reeves. The Hollywood actor could be a poster boy for the sigma male archetype both on and off screen. Reeves is unassuming, generous, and kind like a beta type, but he has a commanding onscreen presence like an alpha. Dark and aloof, Keanu Reeves reveals his true character through deeds just like a true lone wolf.

Tom Hardy is also a quintessential sigma male. He grew up with a troubled past, getting in trouble with the law and battling addiction. He’s dark and handsome with a bad boy overtone. Yet, Hardy is well-respected as one of the greatest male actors in our time. Tom Hardy skirts into alpha male territory quite easily and can take over a pack, but he lives a loner lifestyle.

If you’re interested in going beyond the confines of simple alpha/beta masculine archetypes, then check out the Hero Rise masculine archetype deck. It’s a tarot-style card deck that is filled with different types of male archetypes like warrior, wizard, sovereign and father.

The sigma male archetype is on the rise, too. He can be a hero as you’ve seen in numerous films and books. He can also play a roguish vagabond who doesn’t play by the rules. That’s his strength. The sigma rejects the hierarchy that places alphas at the top. He’s sensitive and intuitive like a beta but cloaks himself in mystery to protect his weaknesses. Do you know any sigma males? Maybe you’re a sigma and just didn’t know it.

Read Next: 7 Ways to Find Your Spirit Animal