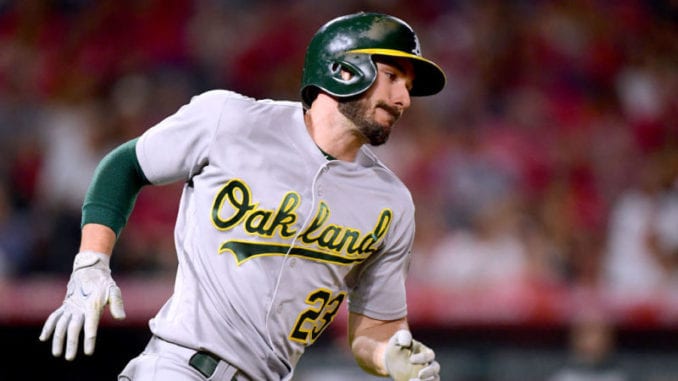 In case you haven’t heard, Oakland Athletics outfielder Matt Joyce received a two-game suspension without pay Saturday for directing an anti-gay slur toward a fan in Anaheim.

The MLB announced the suspension Saturday, saying that Joyce will take part in a public outreach initiative with PFLAG, a family and ally organization supporting the LGBTQ community.

Mr. Joyce's penalty was set to begin Saturday, when he also apologized through the team. Joyce said in a series of tweets that he is “beyond sorry,” and the Athletics made a statement insisting that his language was unacceptable and wouldn't be tolerated.

“In regard to last night's incident, I sincerely apologize to the fans, the Oakland A's, MLB and most importantly the LGBTQ community for my comments and actions,” Joyce's statement said. “A fan yelled vulgar and obscene words about me and my family and I let my frustrations and emotions get the better of me.

“I am beyond sorry for the inappropriate language that I used and understand and agree that those words should NEVER come out of someone's mouth no matter the situation. Anyone who knows me will tell you that it is not reflective of me as a person, how I treat others, how I live my life and that those hurtful words are not my views. I fully support and hope to help the LGBTQ community with their efforts in being treated fairly. I intend to let my actions speak louder than anything more that can be said about this truly regrettable moment.”

The exchange occurred in the eighth inning of Los Angeles' 8-6 win after Angels first baseman C.J. Cron made a diving stop of Joyce's hard-hit grounder.

As Joyce returned to the dugout, he uttered several profanities at the fan, called him an anti-gay slur and challenged him to fight, according to Associated Press photographer Mark J. Terrill, who overheard the exchange. Terrill said he didn't hear the first part of the exchange.

“The Oakland Athletics are very disappointed by the comments Matt Joyce made to a fan during the eighth inning of last night's game,” the Athletics' statement said. “This language is unacceptable and will not be tolerated by our team. We pride ourselves on being inclusive and expect our entire organization to live up to higher standards. We appreciate that Matt is contrite about his conduct and know he will learn from this incident.”

Around baseball, any discriminatory behavior is being taken extremely seriously — and MLB has been firm about its stance.

As reported by ESPN, “the Boston Red Sox in May permanently banned a male fan they said used a racial slur, after a separate confrontation from insults directed at Baltimore Orioles outfielder Adam Jones one night before. In June, the New York Mets fired their recognizable “Mr. Met” mascot — with the oversized costumed head with baseball seams — for flipping off a fan.

Joyce, 33, is in his first season with Oakland and 10th in the majors. He played with the Angels for one season in 2015.”

After the game, Joyce also acknowledged that he shouldn't have reacted.

“It's just one of those things that fans kind of get into the game. Obviously, we're pretty frustrated on our side, and I had just hit a ball hard and had Cron make a good play,” Joyce said. “I was walking back to the dugout and just had a fan yell some vulgar and obscene words.

“For me it just wasn't the right time to say some stuff like that. I fired back, and obviously, as soon as you fire back, you regret saying anything because it's just not worth it.”