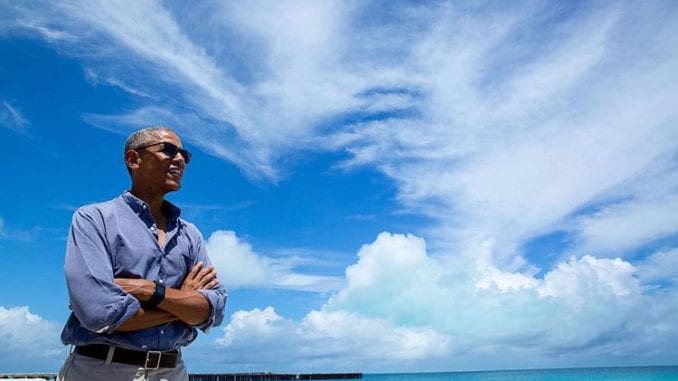 Obama’s feeling the “Summertime Magic” and wants to share it with all of us.

While former U.S. President Barack Obama is no longer in the White House, he and his wife Michelle have stayed important to American pop culture. While other former presidents like Bill Clinton and Geroge W. Bush faded into the distance post-office life, the 44th President has not. Not only do news sites continue to love reporting on his and Michelle’s adventures or work, but the Obamas continue to act as public figures in advocacy, literature, and more.

And now, Obama is proving what a cool man he is outside of the Oval Office by sharing his list of the top 44 Summer hits. Obama recently shared this list that includes songs like Ella Mai’s “Boo’d Up,” Drake’s “Too Good,” Lizzo’s “Juice,” Stevie Wonder’s “Don’t You Worry ‘Bout A Thing,” SZA’s “Go Gina,” and more.

Again, the playlist is made up of 44 songs, to of course play a nod to Obama’s status as the 44th U.S. President, and incorporates many genres from rock, pop, r&b, and more. But Obama isn’t the only Oval Office-adjacent personality to release such as list. Democratic presidential candidates Andrew Yang and Senator Kamala Harris (of California) both released their own lists earlier this summer.

And this isn’t the first time that Obama has released his own playlist of songs. The former U.S. President dropped a list last year for 2018, one for 2017, and one for 2016 too. We hope this tradition continues for many years to come.

If you’re interested in hearing the playlist, you can find it over on Spotify. Otherwise, you can check out the full list below.

“I’ll Be Around” — The Spinners

“Fade Out Lines (The Avener Rework)” — The Avener and Phoebe Killdeer

“Reelin’ In The Years” — Steely Dan

With summer winding down, here’s a sampling of what Michelle and I have been listening to — some new, some old, some fast, some slow. Hope you enjoy.﻿

“I’ve Got You Under My Skin” — Frank Sinatra

“Hold on (Change is Comin’)” — Sounds of Blackness

“I Love You More Than You’ll Ever Know” — Donny Hathaway

“How High the Moon” — Ella Fitzgerald

It's August, so I wanted to let you know about a few books I've been reading this summer, in case you're looking for some suggestions. To start, you can't go wrong by reading or re-reading the collected works of Toni Morrison. Beloved, Song of Solomon, The Bluest Eye, Sula, everything else — they're transcendent, all of them. You’ll be glad you read them. And while I’m at it, here are a few more titles you might want to explore.

“Get Together” — The Youngbloods

“Can U Believe” — Robin Thicke