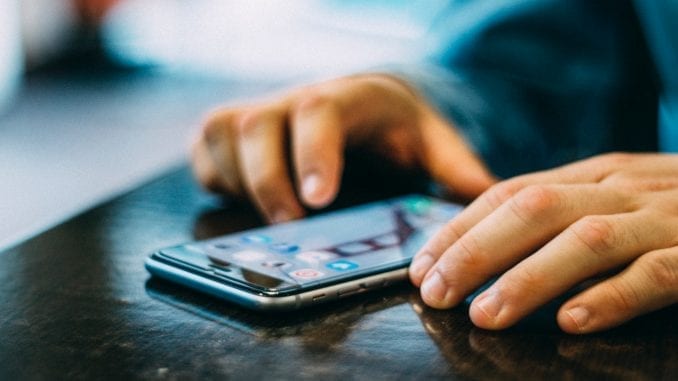 Do you tinker around with your smartphone during business meetings? As a presentation continues, do you find yourself tapping on different apps, like your calendar or Facebook? Has it become a habit?

If the answer is yes, you wouldn’t be alone. Goodness knows I’m guilty of doing this. If I’m not looking at my To-Do list, I am scrolling through Instagram to catch up with the latest.

But according to a new study appearing in Mobile Media and Communications, I probably need to stop. That’s because focusing on my phone (and not the meeting or my boss) is considered rune.

Yep, that’s right. As suggested in the study’s press release, phone tinkering is akin to snubbing.

For this investigation, researchers prepared video vignettes of folks using either a cell phone, a pad of paper, or a laptop computer during a business meeting.

Investigators then showed the videos to 243 viewers and asked them to rate the individual’s competence and effectiveness during the presentation.

Related: Why men should keep a journal

So, you may be wondering about the results? In a nutshell, viewers significantly rated down (by 30 percent) the people who were seen on a mobile device. These down ratings happened even when the manager made clear the expectations for smartphone use during meetings.

To cut to the chase, it’s because of a phenomenon called introspective illusion. That’s a fancy way of saying that when people see you on a smart device at work, even when using for business related matters, there is an assumption you are doing something else (like scrolling through Twitter or Insta).

Men’s Variety spoke to psychologist Tyler Fortman about the study to gain his impressions. Fortman works with new young men and women who are recent college and trying to land their first job.

He went on to add, “Even after a person is hired, they should continue to have good phone etiquette at the workplace, be it in person or virtual through Zoom. Other participants and meeting managers do notice these kinds of things. Think about it for a moment. If you are giving a presentation to a group, how might you perceive people focusing on their phone and not you?” he asks.

There was some good news in this study. People on laptops were downrated less than people on a smart device. According to Dr. Cameron Piercy, a study author and Assistant Professor of Communication at the University of Kansas, “Even if you were to use a laptop in the meeting, you'd be better off than using your phone because there was this big spike in all the numbers that are associated with using the phone.”

So, there you have it, folks – proof that scrolling through your smart device during meetings is not a good idea. In fact, you may be creating the wrong impression.

When you see someone tapping on their phone during a meeting, how do you perceive them?