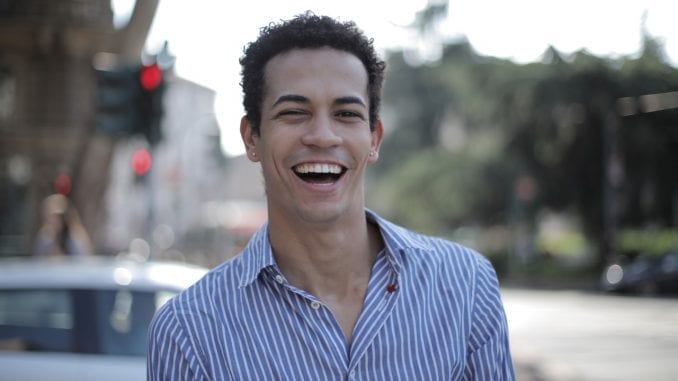 It sure is great to have a laugh with your friends or even while you’re alone. Now, there’s further evidence to suggest that laughter has a positive effect on your mental health. It’s a free way to reduce stress.

Researchers from the University of Basel found evidence during a study on stress and laughter that led to some interesting ideas about the relationship between laughter and our emotional wellbeing. The findings of this laughter study were published in the journal PLOS ONE.

The University of Basel researchers determined that the participants laughed about 18 times a day. The more that they laughed, the less severe their symptoms of stress became. So, laughter didn’t negate their stress. It just made it way more manageable.

How Does Laughter Affect the Body?

Laughter is a physiological response that can change your mood in an instant. When you laugh, your body releases stress-killing hormones called endorphins. Laughter also decreases cortisol levels in the body. That’s your stress-producing hormone. Cortisol manages your body’s fight or flight response.

So, laughter reduces the hormones that cause stress and increases the hormones that produce relaxation. It's a double benefit that works hand-in-hand. The most amazing aspect of all this is that your body is already hardwired to perform this amazing bit of self-medicating.

Laughter can also be useful when you feel a bit rundown or tired. Laughter boosts your energy levels. If you don’t want to reach for the energy drinks or coffee, then try just having a laugh. It will give you a quick hit of energy that might change the pace of your day.

Some Easy Ways to Have a Laugh

You shouldn’t feel embarrassed about laughing. It’s natural and it feels good. If you’re looking for some ideas for creating funny moments, then start by looking in the mirror. Sometimes, you can just look at yourself and laugh. I do it all the time, not because I’m making fun of myself, but because I tend to take myself too seriously. When I realize it, it really cracks me up.

Another way to have a laugh is by trying something really difficult. I don’t mean like rocket science. Just try the latest social media dance challenge and you’ll get plenty to laugh at. You could also try to do a handstand or cartwheel. You might kick over the nightstand, but it could be hilarious.

Some of the best therapy you can have if you’re feeling a bit blue is to watch a good comedy. You can find an old classic on a DVD lying around the house or watch something new on Netflix. It doesn’t have to be a comedy either. You can laugh at the over-dramatic murder mysteries if you like.

Just be mindful of the situation and try to create genuine laughter. There’s evidence to suggest that fake laughter doesn’t work as well to alleviate stress. In 2014, a researcher from Royal Holloway, University of London, found that the brain reacts differently to posed laughter.

In her study, Dr Carolyn McGettigan found that people begin to question why a person was using fake laughter. It activated regions of the brain associated with problem solving instead of stress relief. Perhaps, the brain is better at detecting the genuine article than we think. So, if you’re going to use laughter therapy, be sure to make it as genuine as possible.

In light of the University of London study, you might want to avoid watching sit coms with canned laugh tracks. If you’re feeling a bit down and you don’t find the jokes funny, then your brain will most likely start ruminating on why someone was laughing.

So, prescribe yourself regular doses of laughter to boost your mood and make a difference in your own self-care. You can laugh with friends or laugh alone. It’s entirely up to you.

Another way laughter helps with mental health is by providing a release mechanism for negative emotions. When you feel shame or grief, these emotions tend to find little corners in your psyche to hide and fester, especially for men.

Laughter has an awesome power in finding these hidden, emotional tumors. When you’re experiencing loss from a breakup or a passing loved one, you can laugh about a funny memory or just laugh at yourself and your own reactions.

You’ll probably notice that there’s a period of small, bubbling laughter followed by an all-out guffaw. Then, those hidden, difficult emotions start to run out of you, too. You might find yourself breaking out into tears. Laughter can dislodge feelings of grief and shame, allowing them a vehicle for exiting the mind.

Have you ever been in an argument and something unexpectedly funny happens? You both just deflate and start chuckling a bit. Then, you both laugh out loud and nobody can remember why you were so angry in the first place. Laughter is like an expert diffuser for angry meltdowns.

A good sense of humor is an important quality to have for a man, not just socially but for your overall wellness and mental health. Laughter reduces stress hormones and boosts the chemicals in your body that make you feel good.

It’s also quite empowering to know that you can do something to improve your own mood and mental stability without medication or therapy. One of the worst aspects of mental health problems like depression, anxiety and personality disorders is that they seem to rob you of your own free will.

So, take back control and laugh in the face of your stress.