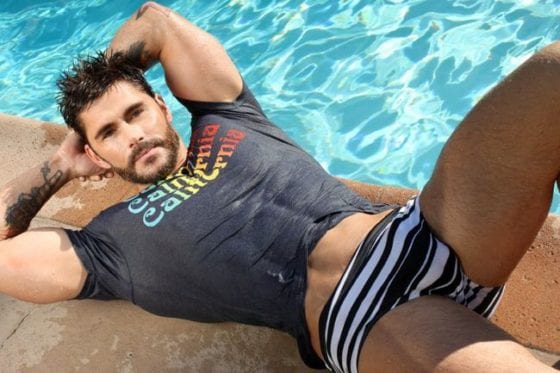 Every year since 1988, December 1 has been set aside as a day for the world to remember all who have been impacted by HIV/AIDS.

As a blog, we join hands with others to help raise awareness about HIV, including many of the stigmas – that still exist – through various events happening here in the U.S. and around the world.

But it’s important to point out that December 1 is as much about the past as it is the present – and the future. We encourage you to learn all you can about this history of HIV. Stop by the Names Project to get a detailed overview of the Quilt.

And if you have time, check out the American Foundation for AIDS Research (AMFAR) website to discover the ever changing trends in HIV.

Here at MV, we’ve decided to remember World AIDS Day in a different way. Because of the focus of our site, we’re presenting 10 super sexy men living with HIV that might surprise you.

There’s no way we can list everyone – there’s just too many hotties to choose from!

The following 10 men represent strength, courage and compassion in their public work related to HIV awareness and advocacy.

Smart, bright, and studly, Scott has been on the front lines of helping to fight discrimination against people living with HIV. He is a senior attorney at LAMBDA Legal and the organization’s HIV 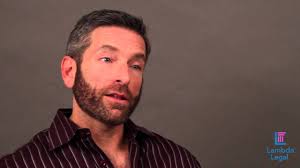 Scott is one of those people who has made (and continues to make) a meaningful impact in HIV law. We’re talking about important issues like access to health care to fighting housing discrimination. He’s even active in helping to create awareness around stigma driven HIV Criminalization and bring about reforms.

Scott was diagnosed in 1999. If you want to check out his handsome man’s crystal blue eyes and million-dollar smile, be sure to click on this video. And for what it is worth, we strongly encourage our readers to chip in a few bucks to LAMBDA so that folks like Scott can continue to wage the battle. Donate here.

Way back in 1984, a television sitcom premiered on ABC television called Who’s the Boss. You may remember this one because it starred major celebs like Judith Light [Angela] and Tony Danza

For our purposes, we’d like to focus on Danny. That’s because in 2015, the actor revealed in an interview with Oprah that he has been HIV positive since 2003.

After sharing the news with the world, he kicked off his Beacon of Light Tour to spread awareness about HIV and the dangers of crystal meth use; and participating in HIV Equal Campaign, which aims to eliminate HIV stigma.

Robert is swoonworthy advocate and Assistant Director at the SERO Project; a network of people with HIV and allies fighting to end the criminal prosecutions of

people with HIV for not disclosing their HIV status.

Suttle knows the reality of the issue firsthand. After being charged by a former partner, he served six months in a Louisiana prison under the state's so-called “Intentional Exposure to AIDS Virus” statute. He has taken this negative experience and turned it into great advocacy work.

If you want to kick in a few bucks to help SERO out, click here.

A generation ago, Greg melted our hearts as an Olympic Diver and all around sports icon. He was the first man to sweep the diving medals in not one but two consecutive Olympic Games. A simple Google search will reveal hideously hot pics of Greg from that era. But you know what? Greg is JUST as hot as he ever was – maybe even more so.

With compassion, strength and grace, he has used his celebrity to advocate for same sex marriage to HIV related causes. Way back in 1995, when it was a risky proposition to reveal your status, Greg told the world he had a plus sign on Oprah.

If you have never seen the movie, Breaking the Surface: The Greg Louganis Story, you really need to! FYI: Mario Lopez stars in the flick (Yum!)

Talk about stunningly handsome! Terrance Moore is the Deputy Executive Director of the National Alliance of State & Territorial AIDS Directors

Terrance was the driving force behind the expansion of NASTAD’s gay men’s portfolio as the director of the Policy and Health Equity teams. And before that, Terrance also worked for the National Prison Project of the American Civil Liberties Union.

And did we mention that he served as a legislative aide for Senators Charles Schumer (D-NY) and Christopher Dodd (D-CT)? He sure did.

Terrance is a graduate of Howard University. Oh – and he also happens to be an all-around stud!

Isn’t Josh cute? He runs the website, I’m Still Josh. Not only do we find this man handsome, we also dig his grassroots awareness efforts on issues related to HIV. On Josh’s site, he shares with visitors that he found out he was HIV+ in 2012. On his “Meet Josh” page, he offers the following:

“I decided to make an HIV blog because my circumstance of being newly poz isn’t my death sentence, it isn’t even close to what defines ME as Josh, and I want people both positive and negative to find a piece of hope through my experiences: to prevent the result that was read to me from being given to them OR if it was a POZ result– realizing it’s only the beginning on a new world.”

Check out this video of Josh here.

There’s just something about Latin men – particularly hot ones like Javier Muñoz! You may recognize him from the smash hit Broadway play, Hamilton!

As shared on Huffington Post, “I have been living with HIV since 2002, and I’m undetectable,” Muñoz, who also served as Miranda’s alternate in the musical, “In The Heights,” said. “I’m healthy, I’m strong and I’m very out about that because of the stigma still attached to it.”

Dude is smoking hot – woof! Check out this interview from You Tube of Javier on the Late Show!

Jack Mackenroth makes us scream woof with cherries on top! He’s been shedding his clothes in the service of HIV awareness for a decade.

Mackenroth is the creator of the anti-stigma campaign HIV Equal. He is credited with coining the phrase “HIV equal” as opposed to “HIV-negative” or “HIV-positive”.

The hope being that people will finally stop using the term in a derogatory manner and stop discriminating against people with HIV. He has also served as the media strategist at Housing Works; a non-profit in New York, which fights the duel crisis of homelessness and HIV/AIDS where he created the Prep Heroes Campaign prepheroes.org.

He was a spokesman for the Merck Pharmaceuticals HIV Education Campaign, “Living Positive by Design” for four years.

If you want to see some hot pictures of Jack, be sure to visit his Instagram page.

If you like the group Styx, you probably know the group’s base player, Chuck Panazzo. But what you may not know is that Chuck is openly gay and living with HIV.

In addition to his rock super stardom, Chuck has been an inspiration and leader in preserving quality of life and equal rights in the LGTB community.

“He is a long-time survivor of both HIV and cancer and through his own courage he has been able to educate, help and support a vast amount of people,” reports Styx World online.

10. Bob Bowers aka One Tough Pirate

Bob is a tatted up stud that we couldn’t resist in our list. Bob Bowers, also known as “Da Pirate,” is a 25-year thriving survivor of HIV/AIDS.

His work as a National youth HIV/AIDS educator in schools and colleges is commendable. If you have a chance, read this exclusive interview with Bob from the Seasons of Pride website!

Thank you for stopping by – truly!