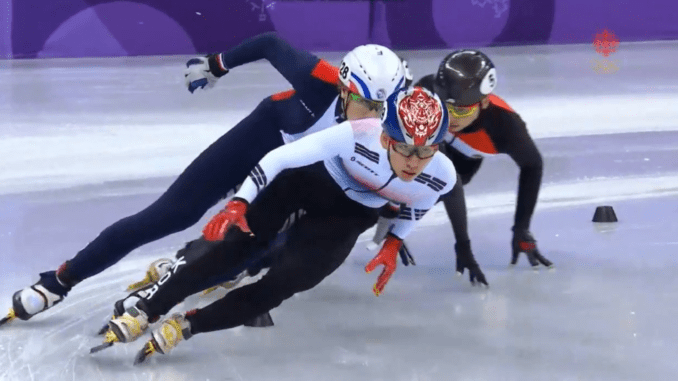 A world champion speed skater will be sitting the sport out for a full year after a prank went too far.

South Korea’s Lim Hyo-Jun is a world-renown speed skater. The 23-year-old is the current world champion of the Men's 1500 m event after winning gold at the Pyeongchang 2018 Winter Olympics with a 2:10,485 time. The athlete was also named short track speed skating’s world overall champion. He also won the gold medal at the 2012 Winter Youth Olympics, during his international debut, for the Boys’ 1000 m event. Plus, he won the 1000 m and 1500 m events in the Budapest leg of the 2017-2018 ISU Short Track Speed Skating World Cup.

Unfortunately for him, all of that past history and athletic success couldn’t prevent him from receiving punishment for a childish prank.

On June 17 of this year, Lim pulled down the pants of a younger, unnamed, teammate in front of female skaters while at the Jincheon National Training Center in South Korea. The pantsing was caught on camera, and instantly incited a scandal among media sources and everyday citizens.

The CCTV of the incident was later reviewed by the South Korean skating federation. The following investigation also included private interviews with the two athletes involved and witnesses.

By the end of the investigation, the federation decided to put Lim Hyo-Jun on a temporary ban for sexual harassment of his male teammate, according to the Yonhap News Agency. Lim won’t be eligible to participate in skating-related activates again until Aug. 7, 2020.

This isn’t the only recent one-year banning that’s happened in South Korea’s world of skating. In fact, the Korea Skating Union banned two-time Olympic champion Lee Seung-hoon, who won the 10,000-meter race at the 2010 Vancouver Games and the mass start event in PyeongChang, in July. The reason being that Lee was accused of sexually assaulting two teammates over the course of several global competition.

These allegations against Lee arose because of other sex scandals shaking up the skating union. Several athletes and coaches within the federation stand in a storm of sexual abuse allegations, according to the Associated Press.

One key name within the case is former national team coach Cho Jae-beom, who has been convicted of assaulting and raping two-time Olympic short track champion Shim Suk-hee. Shim, who’s now 22, says that she has been a target of Cho’s since she was 17.

While Cho is currently in prison for 18 months, his court case opened up a can of worms for athletes and coaches in the federation. The federation has thus dug up and investigated many similar situations like Lees and punished pranks like Lim’s.

And with South Korea becoming a king in the world of short track speed skating, having won 24 Olympic gold medals in the sport since 1992, there are plenty of eyes on the federation and the handling of its members.