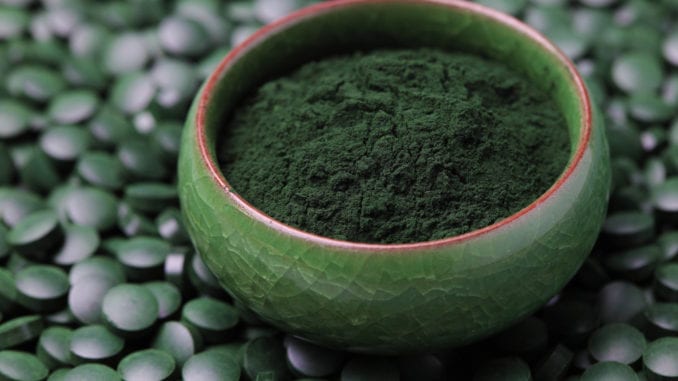 Spirulina is being touted as a “superfood” because of its many amazing natural properties. It’s a blue green algae that grows naturally in water. In other words, it’s a type of pond scum.

Understandably, that might not sound like something you’d want to put inside your body, but numerous studies confirm that spirulina is one of the most nutrient rich foods on the planet. I take it every single day and recommend it to every guy I know.

Why I Take Spirulina?

It’s been around for over 2 billion years. When Spanish conquistadors landed in Central America, they were first introduced to spirulina by the Aztecs. Other indigenous cultures regularly consumed spirulina, too.

For example, the Kotoko people in West Africa have been harvesting spirulina from Lake Chad for hundreds of years and making dried cakes from it. Modern science backs up the indigenous interest in spirulina.

It’s phytochemistry is simply amazing. Scientists aren’t exactly sure why spirulina is so beneficial to the body, but it could be because spirulina fills in so many gaps in our nutrition.

So, I take it as a sort of insurance policy. I get into strange ruts sometimes where I eat a lot of fast food and miss too many gym sessions. Spirulina helps protect my body from these guilty binges and it serves as a reminder that my health is important.

Why is Spirulina Good for You?

NASA uses it as a dietary supplement for astronauts on long space missions. The main reason is that this microscopic cyanobacterium has 70% natural protein by volume. No other protein source can match spirulina. It’s suitable for vegans and people with gluten intolerance.

It’s loaded with vitamins and minerals

Spirulina is a powerful antioxidant. It contains high levels of B vitamins (B1 and B2). These vitamins help protect the cell walls from oxidative stress and help your heart function normally. Spirulina has calcium, magnesium, iodine, manganese and iron. Just one scoop serving contains 7% of your daily value of iron.

Spirulina is a viable source of vitamin A, as well. A scoop of spirulina will cover 69% of your daily intake. Vitamin A is so crucial to keeping your immune system strong. Scientists in Japan ran a study in 2002 that found a correlation between spirulina and a healthy immune response.

During their research, scientists found that spirulina invigorated the immune system of male volunteers and may even help to suppress cancer development. Spirulina boosted the body’s signaling phase for creating blood cells that fight off diseases and viruses.

A separate study from Turkey found that spirulina improved treatments for allergic rhinitis. The study’s findings were published in 2008. Researchers determined that spirulina was effective in improving symptoms such as nasal discharge, sneezing, nasal congestion and itching.

Related: Do You Know the Benefits of Turmeric?

Other Benefits of Spirulina

Some people think that spirulina is effective at lowering high cholesterol, reducing fatigue and providing energy, healing cancerous tumors, and destroying viruses. Clinical studies are inconclusive in those areas, but some correlations do exist.

The US FDA classifies spirulina as (GRAS) or generally recognized as safe. It’s used as a food coloring for some candies and gums. Indigenous people have been consuming spirulina for hundreds of years. However, some people do experience some mild side effects.

If you suffer from acne or you’re especially prone to skin breakouts, then you should talk to your aesthetician or doctor before taking spirulina. It’s a blue green algae that soaks up toxins and tries to get rid of them. So, spirulina can aggravate acne as it pushes the toxins out of your body through the epidermis.

You also need to carefully consider the source of your spirulina. As is the case with the acne, spirulina soaks up toxins. If the spirulina is grown in a contaminated pool it can contain toxic metals and harmful bacteria. When you buy spirulina make sure that its directly sourced, purity tested, and sustainably grown.

Spirulina isn’t safe for some people who have auto-immune disorders like lupus and multiple sclerosis. Spirulina might over-stimulate the immune system in these people and interfere with blood clotting and produce dangerous side effects for people on auto-immune medication.

So, it is extremely important to consult with your doctor before adding spirulina to your diet.

How to Take Spirulina

Spirulina powder can be mixed into foods and beverages, or it can be taken as a pill supplement. 5 to 15 grams is the recommended daily dosage for medicinal benefits and that equates to about two and a half teaspoons of the spirulina powder.

Gulping down scoops of chalky powder isn’t an appetizing idea. Neither is crunching through dozens of tiny pills at a time. So, taking spirulina powder straight to the face or in pill form just doesn’t seem all that practical. However, combining it into your food and drinks helps to overcome the mental hurdle of ingesting such a gnarly looking substance.

One of the easiest ways to get your daily spirulina is to incorporate it into something you’re already taking. By adding a couple of teaspoons into your morning OJ or post workout smoothie, you get all the benefits of spirulina plus the nutritional benefits of your beverage all in one go.

Another way to enjoy spirulina is to add it to your baked goods because the flavor seems to pair well with chocolate. You’ll barely notice the taste if you mix a couple of teaspoons into a chocolate chip pancake batter. The same is true for chocolate chip cookies. Just watch your sugar levels, guys. You don’t want to eliminate one health problem in exchange for another.

Related: Why’s Everyone Talking about Jackfruit?

If you’ve got the munchies, check out this vegan curry and spirulina smoothie combo.

Spirulina is not a magic bullet. Superfoods should be incorporated into your regular diet, not used in high doses. I use spirulina regularly and I enjoy the benefits. I’ve noticed that I don’t get colds and viral infections as frequently as I used to.

The taste is palatable if you mix with other flavors. It goes well with stone fruits like raspberries and strawberries. It also pairs well with chocolate and coconut. If you’re concerned about your immune health and protein intake, then try spirulina for better health.