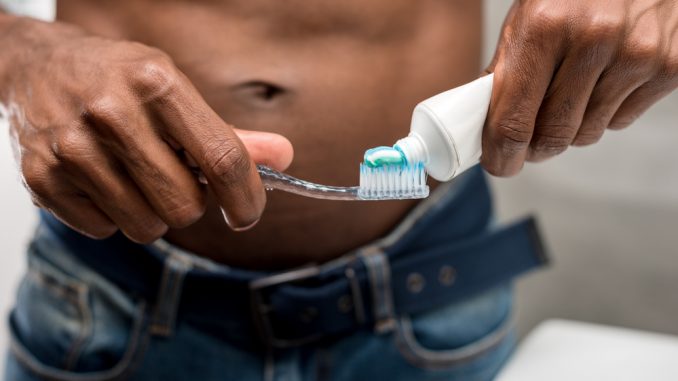 Here’s why you shouldn’t put toothpaste on your unit

A few days ago, a friend of mine named Eddie told me he’s been massaging a bead of toothpaste on his manhood. When I asked him why, he said, “To help me last longer in bed. Haven’t you heard about this?”

At first, I thought he was joking. I mean who would be silly enough to think toothpaste should be rubbed on your peen? But after I did some research, I found he wasn’t kidding around. Apparently, “the toothpaste solution” has become a thing.

Trending For Some Time

Metro did some reporting on this back in 2019. According to the “trick”, which was going around YouTube and various online discussion boards, massaging a tiny amount of the minty stuff onto your equipment will eliminate premature release and get rid of ED problems, without medications.

The myth also suggests that when properly applied, toothpaste with also help you last longer in bed and create a larger, fuller end-product – if you get my drift.

Curious if any of my other male friends were using their toothpaste for non-dental needs, I decided to conduct an informal poll (Survey Monkey).

To cut to the chase, out of the 15 buddies I contacted (12 replied), five said they had heard of the toothpaste thing. What’s more, three revealed they had tried it at least once in the last six months.

All I can say is that I was shocked. Don’t get me wrong here. I can understand why someone might want to reach for the non-pharmaceutical. But toothpaste? Really? Why use a tube of AIM when there are so many other natural options available on the marketplace?

Wanting to know if using toothpaste for intimacy reasons was safe, I contacted Dr. John Berry, an Illinois Urologist with Advocate Health.

“The toothpaste thing is an urban myth. It doesn’t help with premature ED or help guys ‘last longer’. In fact, it can have the opposite effect because the oils in toothpaste that create that minty taste can irritate sensitive skin,” says Berry. “Do people not realize there are bleaching agents in many of those products?” he adds.

When I asked him if toothpaste could be used as a lubricant, he replied, “Absolutely not. I’ve seen cases where a mild caustic burn has developed.”

Other doctors are offering similar advice, according to reports online.

So, if using toothpaste “down there” isn’t such a great idea, what are the other options? The conventional advice is to make an appointment with your physician.

The hard truth is (no pun intended) premature release and ED can have medical or psychological roots.  It’s best to visit with your general practitioner to discuss what’s happening.

So, what about my friend Eddie. Did the toothpaste thing work for him? Here’s what he texted me as a response a few days after his disclosure.

“Well, I tried it for a week, and it really didn’t help. Now I’m worried I might have hurt myself because it’s super sensitive. Can you recommend a good men’s doctor?”

I think his response says everything, don’t you? Have you used toothpaste “down there”? Share your comments below.

Does Turmeric help you last in bed?

About Rico Woods 43 Articles
Rico is a DC based freelance writer who pens pieces about culture, society and current events. As an out CIS gender man, look for blog posts that are bizarre, fun and sometimes "out there".