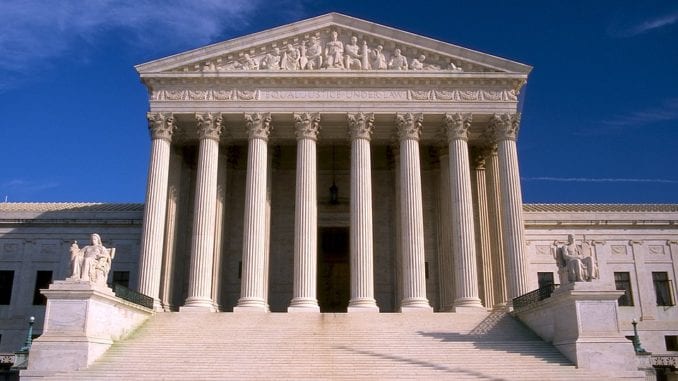 As reported in USA Today, The Supreme Court on Monday struck down an anti-LGBTQ Arkansas law that treated same-sex couples differently than opposite-sex couples on their children's birth certificates, over the dissent of three conservative justices.

The ruling came from the court without one single justice's authorship. It’s important to note that  Justices Clarence Thomas, Samuel Alito and Neil Gorsuch dissented.

Some had wondered how Gorsuch might rule on LGBTQ related issues. It appears we now have some of that answer. Note that GPB opposed his confirmation to the court and was one of the first LGBTQ blogs to state in a public way our opposition.

“The practice is rare following the high court's 2015 decision striking down state bans on same-sex marriage, but some states put the husbands of new mothers on birth certificates even if they are not the biological fathers, while making no provision for same-sex spouses.

The challenge was brought by two female couples in Arkansas, where health officials refused to list the non-biological spouse on a newborn's birth certificate — even though state law requires that husbands who are not the biological fathers receive that status.

The state Supreme Court upheld the law in December in a divided ruling. Associate Judge Jo Hart reasoned that “it does not violate equal protection to acknowledge basic biological truths.” But Chief Justice Howard Brill urged a change in the law, quoting Bob Dylan's “The Times They Are A-Changin.'”

In asking the U.S. Supreme Court to hear the case, Douglas Hallward-Driemeier — one of the lawyers who won the landmark same-sex marriage case two years ago — said upholding the Arkansas law would let states “once again relegate same-sex couples and their families to the stigma, injury and inequality of ‘second-tier' status.”

If the law had been allowed to stand, he said, other states — among them Alabama, Alaska, North Carolina, Wisconsin and Wyoming — would not be pressured to change similar statutes that differentiate between husbands and same-sex spouses.

The state argued that the two couples should have challenged the state's artificial insemination statute rather than its birth certificate law. It also noted that after winning a lower court ruling, the couples received birth certificates listing both same-sex spouses as parents.