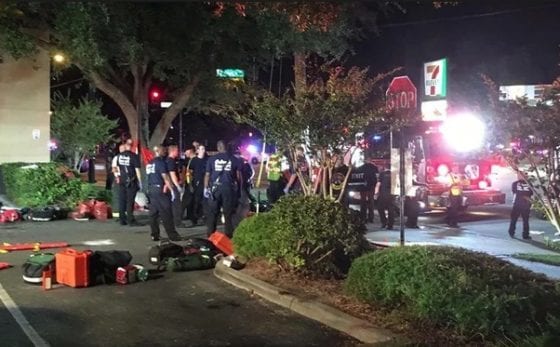 As events continue to unfold in the tragic mass killing of innocent patrons of the gay nightclub Pulse in Orlando, Florida, it appears the details of who was behind the deadly attacks are slowly starting to emerge. We’ll give you a quick rundown of what we know and then share one disgusting bit of commentary from a jerk on the right.

The gunmen has been identified as Omar Mateen, rounded up several people as hostages. He was eventually killed by the police. During a press conference, Orlando Police Chief John Mina said “Our SWAT officers exchanged gunfire with the suspect. The suspect is dead.” Mina added, “He appeared to be carrying a rifle, an assault-type rifle, and a handgun and had some type of device on him.”

A donation page to help the victims of the Pulse Nightclub shooting has already been set up.

Hateful response from one on the right:

As the nation tried to make sense of the horrible tragedy in Orlando, the large universe of political leaders from offered supportive condolences. One response, however, has enraged people everywhere.

.@DanPatrick I don't believe this was a scheduled tweet for a second. Don't worry. I saved it for you. #ResignNow pic.twitter.com/YDnhT5Cz3t