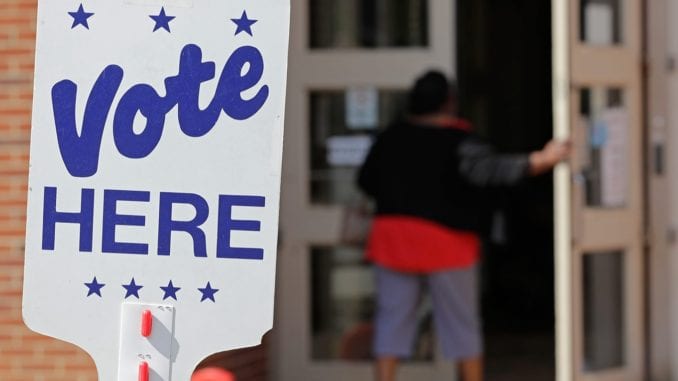 Here’s why you should vote

A common question I get from unregistered voters is: “Why should I vote?” Variations of this question include: “Does my vote matter?” and “Can my vote really make a difference?”

The simple answer to all the above is – yes.

The 2020 presidential election is projected to be one of the highest for voter turnout in American history. Some experts have suggested somewhere between 160 – 170 million people will be casting a ballot.

Only the future knows who will ultimately show up for the November 3, 2020 election. But if the 2018 midterms are any indication, it’s logical to assume turnout will be sky-high.

Which leads to the purpose of this post – why should I vote? It’s a perfectly logical question, particularly given everything at stake. I’m going to answer that question in the most straightforward way that I can.

As we can see from 2016, elections have consequences. Many people decided to sit it out for the battle between Hillary Clinton and Donald Trump. One of the main reasons some folks skipped that election was because they thought “Hillary had it in the bag”.

Oh, how they were wrong.

That’s roughly 77,000 votes across three states. Between third party voting, voter suppression efforts on the part of the GOP and voter apathy, the math equated to a Donald J. Trump Presidency in the electoral college.

The consequences of his presidency have been devastating, which leads us to our other points.

2. Not voting gives away your power

This one is simple. If you don’t vote, you give up your power to shape the direction of America and your state. Elections are won and lost based on who shows up and by who doesn’t.

The GOP is desperately hoping specific groups of people don’t vote in 2020. These include college students, lower income individuals and persons of color (all of which tend to lean Democratic).

If you are unregistered or registered but categorized as unlikely vote, you are essentially letting the other side speak for you. Is it any wonder why the Republicans are working night and day to suppress the vote in 2020?

3. It’s about your money

You pay taxes at the local, state and federal level. But do you know how those tax dollars are spent?

Donald J. Trump gave away one of the biggest tax cuts to the super wealthy in American history. Working people, students, the poor and minorities benefitted the least.

Had he not been elected, those tax cuts would never have seen the light of day. Imagine how your vote in one of the previously mentioned swing states could have made the difference?

Since being elected to office, Mr. Trump has gutted important policies that have a direct impact on climate change. He’s also eviscerated protections for some of earth’s most vulnerable species.

Some scientists have suggested that the earth only has 11 years to prevent irreversible climate change. You can see that your vote truly matters in deciding who will protect our planet and all its inhabitants. The states are indeed high.

5. The courts – including Supreme Court

When you cast a vote for President and Senate, you have a direct say on who is chosen to sit on the courts. We’re talking about Federal appointments that last a lifetime.

Are you for a woman’s right to choose? How about the ability to organize and have a union? Does gun control matter to you? All these things are decided by judges who sit on the federal courts.

State courts come into play, too. The judges you select in your state are the ultimate deciders on how laws are interpreted where you live – at the local level.

So, yes – your vote absolutely impacts the law. Your power to influence those appointments is critical.

We often hear the term gerrymandering but what does it really mean? In a nutshell, it’s when political hacks, usually at the state level, carve out advantages for their party by skewing district boundaries.

The act of gerrymandering robs you and the people in your community of fair representation by slicing out key demographics from the equation.

Check out this article on the website Reclaim to learn more about the harms of gerrymandering.

7. You could decide the election

“Does my vote matter?” – that’s the question a lot of people have. The simple answer is yes it does.

Our electorate has become hyper-partisan. As a result, we have seen more and more elections become extremely close and not just at the federal level. Local elections are now close, too.

In some cases, elections have been won or lost by one single vote. Want some examples? Here is an excellent post from the folks at Mental Floss that provides 10 examples of how one vote decided the outcome of a race.

It is for this reason your vote is so previous. It’s also one of the reasons the GOP loves to drive up voter apathy by making people so cynical of the process that they decide to stay at home (which benefits Republicans big time).

8. Your vote impacts the future

Prior to the 2016 election, I remember some people saying, “Nothing Trump does will affect me or my family on a personal level.”

As we can see from some of the points above, that kind of thinking simply isn’t true. Your vote not only influences the here and now – it also impacts the future.

Here are some examples:

I could go on, but you get the drift. Your vote absolutely represents your voice in these areas and many more.

People often look at me when I suggest to them that voting is their civic duty. But in so many ways, it is.

“Every nation gets the government it deserves”.

Those were the words spoken by 19th century French philosopher Joseph de Maistre are as true today as they were back then. The difference being is that in the here and now, the “deserve” part is all about who shows up to vote and who doesn’t. It’s that simple.

10. America depends on you

The final reason you should vote is because many people are depending on you. That may sound corny, but it is true. When you combine your vote with others who believe in the same things as you, your voice is amplified – and multiplied.

By voting, you join forces with others to shape the direction of your community, your state and America. That’s how democracy works.

So, yep – people are depending on you – big time.

What Do I Do Now?

If you want to register to vote, you can do it easily online through the Voter Participation Center and can be done with the process in two minutes or less.

Many states now offer early voting and Vote By Mail (VBM). One of the best things about VBM is that you can avoid the long lines and feel safe in the knowledge in knowing you’ve attended to your civic duty.

Hint: If your state offers vote by mail, I highly encourage you to sign up for it if it’s offered during the registration process.

Do you think you already have registered to vote? If you want to verify this, visit vote.org and see what’s up.

Here’s what you may not know. Millions of people have been purged from the voter rolls since 2016. Even if you think you are registered, it’s important to double check.

If you can’t find your information, register to vote immediately. Most states have strict deadlines on registration dates.

If you want to know your rights as a voter, there is an excellent information page put out by the folks at Rock the Vote. Click on your state to learn specifics.

If you are registered to vote and want to help others get registered or encourage others to participate, there are several options.