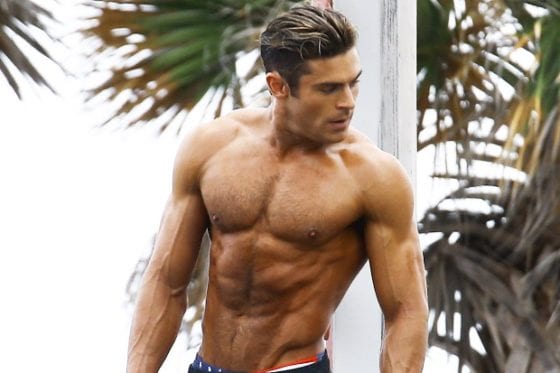 It’s hard not to marvel at Zac Efron’s body. I mean just look at it. He’s got shredded abs, a super-muscular chest and biceps that most dudes will kill for.

It's like he grew up overnight and transformed into a muscled-up adonis.

So what has Zac been doing to realize such impressive results? Does he live at the gym? Has he been using supplements? Is he juicing it up?

The answer I am about to give might surprise you. Here’s the scoop: Zac Efron has been freezing his muscles using cryotherapy. At least that’s what they are saying over at the National Enquirer.

According to a report appearing in the July 25, 2016 edition of the supermarket tabloid, Zac has been undergoing cryotherapy treatments in preparation for the upcoming film, Baywatch.

“Neighbor’s star Zac, who had to transform his physique to make it even more buff for the upcoming Baywatch film, used cryotherapy to help his body and muscles recover from grueling six-hour workouts daily.”

While we have no way of verifying the truthfulness of what the Enquirer is sharing in their news story section, we will say that there is a trend in Hollywood right now on this front.

ABC News reported last year that many celebs are undergoing muscle freezing treatments to help them with everything from having a better complexion to rapidly cooling off hot, worked out muscles.

Check out this video below from Business Insider on the process:

More from the Enquirer on Zac:

“The 28-year old hunk told pals he feels younger and more energetic, and that his brain feels fresh!”

The sessions are said to last anywhere between 90-seconds and three minutes. While in the cryogenic chamber, temperatures can go as low as minus 292 degrees!

Undergoing muscle freezing treatments do carry some risk. A medical source who was consulted on the Enquirer’s piece suggests that eight minutes is the maximum amount of time someone should be frozen.

“Any longer than that and the person would be dead!” suggests the tabloid’s expert.

FYI: There was an incident in 2015 where a 24-year old Las Vegas spa worker was found lifeless inside of a liquid chamber used for cryotherapy treatments.

The corner ruled she suffocated.

Does cryotherapy work? Who knows. The research appears to be somewhat mixed when it’s used for the treatment of muscle inflammation.

What’s certain is this … whatever Zac Efron is doing is working!