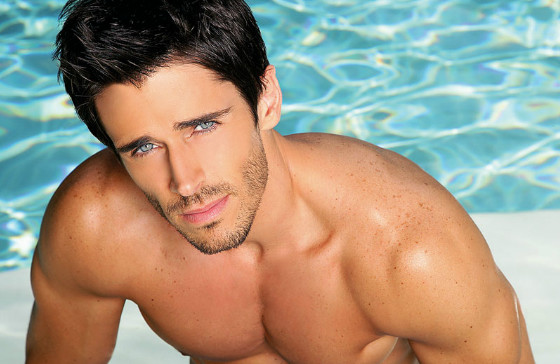 If you are a fan of daytime television, you’ve no doubt seen the muscled up actor on NBC’s Days of Our Lives, Brandon Beemer. On the show, he plays the part of Shawn Douglas Brady.

With sharp blue eyes and a body that a lot of guys who love to have, he's got a serious following.

Given our interest in various male celebs, we thought it might be kind of fun to share 10 facts about Brandon Beemer you might not know. We wouldn’t be much of a blog if we didn’t write something about him, right?

As part of what follows, we’ve included several pics of Brandon to give you an idea on how this guy works out his physique.

Given his unique looks, some people have wondered what Brandon Beemer’s ethnic background is.

According to an interview he gave back in 2007 to TV Guide, he’s a mix of Native American, Irish and German. He describes himself as a “mutt”.

2. First job was a truck driver

While it’s hard to imagine now that Beemer would be doing anything other than modeling and television, his first job was as blue collar as you can get.

According to his IMDb file, he worked as a truck driver for the Coca Cola bottling plant in Wilsonville, Oregon. Wouldn’t you have loved to see him delivering soda pop to your local grocer?

When you take a look at Brandon’s Instagram account, it’s fairly obvious that the man loves being outdoors – particularly on the beach!

In this way, he is similar to another soap opera stud who bears a striking resemblance to Brandon, Mr. Ryan Paevey.

This will come as no shock to you but for those who may not know, Brandon Beemer used to be a model.

As he described in an interview with Buddy TV back in 2007 when asked about his modeling work, he shared the following: “Yeah, it was kind of just a vehicle to get me out of Eugene, Oregon. It was an opportunity that gave me a place to stay in New York and a bit of way to make a little bit of money so yeah.”

Like many on daytime television, Brandon Beemer is a supporter of LGBTQ. And he isn’t a “Johnny Come Lately” to the cause.

Back in 2009, he appeared as a poster model for the NoH8 initiative in California. While Prop 8 passed, it ultimately led to a political earthquake in the LGBTQ community, ultimately helping pave the way for marriage equality by the U.S. Supreme Court in 2015.

6. Used to be on other soaps

Before he was on Days of Our Lives, Brandon used to be on CBS’s The Bold and The Beautiful. In fact, he was on the show from 2008-2012 in his role as Owen Knight.

And believe it or not, he had a brief stint on ABC’s General Hospital from 2005-2006, playing the part of Seth.

To our knowledge, Brandon isn’t married and doesn’t appear to be dating anyone seriously.

In the past, he was in a serious relationship with fellow soap star, Nadia Bjorlin, from 2006 to 2013. Nadia ended up getting married to Irish born model and actor, Grant Turnbull.

Summer right around the corner has got me like… #GymTime 💪🏼

We literally combed through scores of Brandon Beemer photographs and couldn’t find any that were “bad”.

The truth is, he’s one of those guys who just has a photogenic presence. Just visit Brandon's Instagram account and we think you'll agree.

We’ve read a number of interviews with Brandon and one characteristic that shines through is how humble he is.

Here’s a You Tube interview of Brandon for After Buzz TV that kind of drives home the point we are making.

Believe it or not, Brandon is a fairly private guy. He’s not one to grab the spotlight or throw himself into controversies.

When you look at the totality of his career and the interviews he’s given over the past 10-15 years, it’s fairly clear he’s selective about what information he shares with the public.

A refreshing attribute in an age where so many celebs use whatever excuse they can to grab headlines.