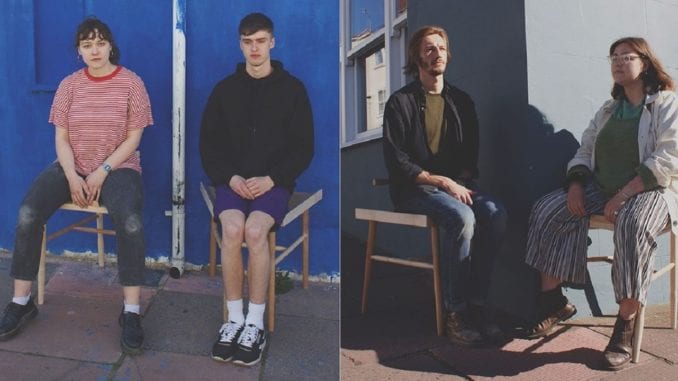 A design student is getting some mixed signals after she created chairs to discourage manspreading.

Laila Laurel, from Norwich, recently received a big award after she made two chairs. One discourages men from spreading their legs too wide while sitting, while the other encourages women to do the opposite.

Laurel ended up winning the Belmond Award at New Designers in London. The award, which includes a £1,000 prize and the chance to design a product for a hotel and leisure company, is one of the top honors at the showcase which spotlights work from universities across the UK.

Laurel says she came up with the idea as “more of a concept and not necessarily a functional design” after she had multiple experiences of men “infringing on my space in public.” She also cited The Everyday Sexism Project, founded by Laura Bates, as partial inspiration. The project collects women’s daily experiences of gender inequality.

“I don't take myself too seriously, because I really want my work to be both important and thought-provoking, whilst also being engaging and funny.

“I think humour is a really interesting tool in order to tackle social issues.”

But not everyone finds Laurel’s creation fun or enlightening. In fact, many people online, mostly men, are very angry at her for coming up with the chair. From YouTubers to internet commenters online, people have expressed their distaste for the chairs. That’s especially true for the anti-manspreading chair.

“I have received a lot of explicit messages from men who seem to be under the impression that I hate all men,” Laila Laurel noted, according to the BBC News. The University of Brighton student said that “couldn't be further from the truth frankly.”

She then elaborated, while talking to British program Sunday Morning Live, that she’s received some pretty hateful messages because of the chair.

“There has been a lot of backlash online from them… Mostly men. People online being really rude. Telling me that maybe the world would be a better place if I jumped off a tall bridge.”

No matter your thoughts on the seats, to send the student death threats or wishes for her death is deplorable. But Laurel says she’s learned from the hate.

“It was super discouraging and quite hard at the beginning,” she told the tv program. “But I think I’m beginning to realize that when you’re tackling social issues or trying to discuss them, especially ones that tend to be quite polarizing such as gender politics, you do tend to step on people’s toes. And the people that have been messaging me may be a small portion of the population and really the ones who want to spread hate, and so it’s maybe not worth having a dialogue with them.”

This anti-manspreading chair does not have a lot of fans, but it’s definitely starting conversations around manspreading and gender equality. And while we might not all be fans of the chairs, we can appreciate the creator’s bravery in confronting the hate.