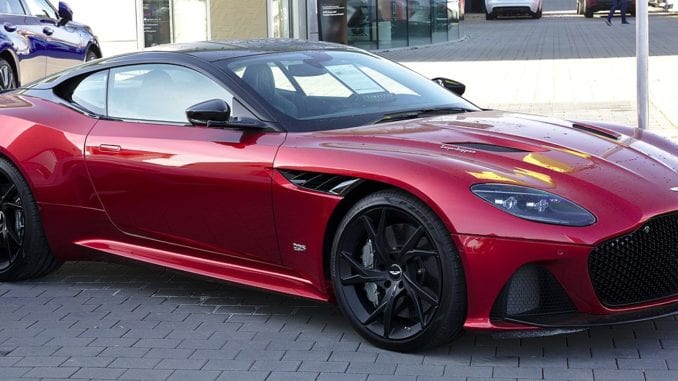 The DBS Superleggera is a beautifully-sculpted, automotive weapon that exhudes raw power and speed.

The British are well-known for their restraint and politeness, but there’s nothing tame about the DBS Superleggera. Just one look at the Superleggera and you’ve got to admit that there’s just something amazing about the way this car dances on the precipice between aggression and art.

The aesthetics and capabilities of the Superleggera suspend all reality. This exotic supercar is dressed in a sexy tuxedo, but it’s packing some serious heat under the bonnet. The engine rumbles and roars like an angry lion that someone has managed to place on a leash. It’s delightfully unnerving.

This 2-door, twin-turbo supercar wouldn’t seem out of place in one of James Bond’s secret garages, but it could find its way into yours – if the price is right. The asking price is just under $300,000. Sure, there are plenty of supercars that cost less than the Superleggera, but none carry such mystique and charm.

This supercar is often compared to its cousin – the DB11 from Aston Martin. The DB11 has a bi-turbo V8 version and a V12. The V12 engine of the Superleggera is basically the same as the DB 11, but the transmission has improved casing and delivers more torque at lower RPMS. The DB11 clocks in just a few seconds slower and loses a tick or two on acceleration, as well.

The DBS Superleggera’s bi-turbo V12 engine is managed by a torqued-up, 8-speed transmission with paddle shifters. The rear-wheel drive powertrain leaps to action when all its 700 lb. ft. of torque are applied. By comparison, the Ferrari 812 Superfast super-lags a bit until 7,000 RPMS.

There are 3 driving modes that you can toggle through from the steering wheel. There’s GT, Sport and Sport Plus modes. Each different mode changes the stiffness of the suspension and steering, as well as the gear ratios.

Related: The Most Expensive Hyper Car Ever Built

Front seats are thickly-padded with chunky side bolsters and distinctive style elements. The interior color palettes and materials are sumptuous. The Dark Alchemy model trim, with its red leather and quilted patterns on the seats, is just downright nasty. It borders on style overkill.

Space comes at a premium in the Superleggera though. There’s ample room up front for two occupants, but rear seat passengers might feel that they’ve been shoved into the back of a rocket ship moments before takeoff.

The steering wheel is D-shaped and firm with a flat bottom and paddle shifters behind the stack. The control layout feels natural, but there isn’t much refinement in their arrangement. The center console stack might be a tad too large for the cockpit and it doesn’t add much utility for the amount of space that it occupies either.

On the Aston Martin website, Marek Reichman, Chief Creative Officer, commented about the Superleggera’s distinctive aerodynamics. “We are not car stylists, we are design engineers.” Well, it seems like they have done a good job of both with the Superleggera.

The Superleggera has a broad-shouldered, powerful stance that looks wider and meaner than the Aston Martin Vantage and the DB11. That’s not just for style points either. The shape of the body is built to better cool the engine systems and provide added stability while driving.

The black mesh front grille is also designed for better engine cooling. It’s shaped like a wide hexagon and takes up most of the front fascia space. The profile of the Superleggera is most likely its best side. The large 21-inch wheels are impressive and the subtle panel insets effectively contrast the smooth lines of the body.

The fifth gear torque exhilarates and comes as a bit of a surprise the first time out. When accessing the higher gears and top speeds, the DBS Superleggera never lifts or skips across the road like other rear-wheel drive supercars, but it comes on strong and steady.

Driving this car at high speeds feels much easier than cruising city streets. In those scenarios, the bulky front end and overly-eager throttle make the Superleggera feel jumpy. It’s hard to keep all that horsepower in the cage and it lurches a bit in first and second gear, begging you to open it up.

The V12 engine gurgles and pops. It will drive your neighbors crazy, but the cabin is so well dampened that you’ll hardly complain. Road noise is also sufficiently cancelled out. Braking is composed at nearly any speed and the DBS Superleggera carves into tight corners with a natural intuitiveness that you’d expect from a true supercar.

It’s rare to come across a vehicle that blends form and function so well. Usually, a supercar is either dangerously swift and powerful or it’s elegant and refined. Rarely does one exist in both spheres simultaneously. Well, the Aston Martin DBS Superleggera makes no compromises in either column.

This isn’t a vehicle that undergoes yearly upgrades and updates either. Decidedly British, the DBS Superleggera is unflinchingly fast and sophisticated. It hits at once upon the best features of a supercar and remains there….a true British classic.

The Superleggera isn’t a Ferrari, but it certainly will make Lamborghini fans think twice. The rear wheel drive set-up puts the DBS Superleggera in the same stratosphere as the Bentley GT. It’s got the Bentley beat on charisma, but little else though. The Bentley’s got more weight, but it also has all-wheel drive and more luxury between the doors.

So, the DBS Superleggera from Aston Martin is extremely fast. It can jump up to 60 MPH in 3.4 seconds. Speed aside – the Superleggera is exotic. People who can afford to buy one will delight in its remarkably cultivated design and power-on-tap performance. People who opt to rent one for the weekend will enjoy all the slack-jawed stares from people on the sidewalk trying to guess – What…the…?

What do you think of the Aton Martin DBS Superleggera? Let us know what you think in the comments and be sure to share this article with your friends.