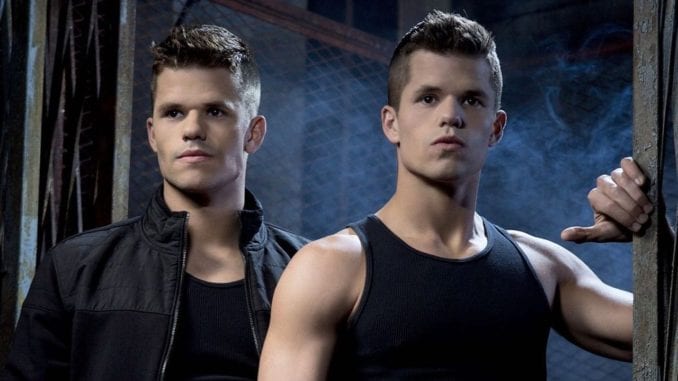 The Teen Wolf twins are about to return to our screens, but this time on the big screen.

According to the AV Club, Charlie and Max Carver have signed on to appear in Matt Reeves’ upcoming The Batman movie. They join many notable talents like Robert Pattinson (Batman), Colin Farrell (The Penguin), Zoë Kravitz (Catwoman), and Andy Serkis, (Alfred Pennyworth).

The movie is currently filming and has already released official video/footage of Pattinson in the batsuit and standing by the batmobile. It is currently unknown which roles will be played by the twins, though comic fans are hoping they’ll be playing villains Tweedledum and Tweeedledee (henchmen of the Mad Hatter) or max and min (henchmen of Two Face).

This will be the first major movie role for Charlie and Max Carver. The two started out in minor roles for tv in shows like Desperate Housewives, Teen Wolf, and The Leftovers. But for most viewers, the two became recognizbel for their (often shirtless) roles in Teen Wolf as Ethan and Aiden.

In addition, the two gained public attention after Charlie came out as gay in 2016.

“I […] knew, however abstractly, that I was different from some of the other boys in my grade,” he wrote to caption an Instagram post at the time. “Over time, this abstract ‘knowing’ grew and articulated itself through a painful gestation marked by feelings of despair and alienation, ending in a climax of saying three words out loud: ‘I am gay’.”

Charlie then explained that he struggled with his private and public image as a Hollywood talent. But over time, he realized the importance in coming out because of his job and influence.

“Coming Out’ is different for everyone. You can always Come Out to yourself. Coming Out as Gay/Bi/Trans/Non-Binary/Yourself or What-Have-You is at first a personal and private experience. If you’re ready and feel safe, then think about sharing this part of yourself with others.”

Pt 1: “Be who you needed when you were younger”. About a year ago, I saw this photo while casually scrolling through my Instagram one morning. I’m not one for inspirational quotes, particularly ones attributed to “Mx Anonymous”- something mean in me rebukes the pithiness of proverbs, choosing to judge them as trite instead of possibly-generally-wise, resonant, or helpful. And in the case of the good ol’ Anonymous kind, I felt that there was something to be said for the missing context. Who wrote or said the damn words? Why? And to/for who in particular? Nonetheless, I screen-capped the picture and saved it. It struck me for some reason, finding itself likeable enough to join the ranks of the “favorites” album on my phone. I’d see it there almost daily, a small version of it next to my other “favorites”; I’d see it every time I checked into the gym, pulled up a picture of my insurance cards, my driver’s license…. Important Documents. And over the course of about-a-year, it became clear why the inspirational photo had called out to me. As a young boy, I knew I wanted to be an actor. I knew I wanted to be a lot of things! I thought I wanted to be a painter, a soccer player, a stegosaurus… But the acting thing stuck. It was around that age that I also knew, however abstractly, that I was different from some of the other boys in my grade. Over time, this abstract “knowing” grew and articulated itself through a painful gestation marked by feelings of despair and alienation, ending in a climax of saying three words out loud: “I am gay”. I said them to myself at first, to see how they felt. They rang true, and I hated myself for them. I was twelve. It would take me a few years before I could repeat them to anyone else, in the meantime turning the phrase over and over in my mouth until I felt comfortable and sure enough to let the words pour out again, this time to my family…

“I now believe that by omitting this part of myself from the record, I am complicit in perpetuating the suffering, fear, and shame cast upon so many in the world. In my silence, I’ve helped decide for to you too that to be gay is to be, as a young man (or young woman, young anyone), inappropriate for a professional career in the Arts (WHAAA???) So now, let the record show this- I self-identify as gay.”

Now, Charlie is joining his brother in a major superhero film. In addition, he has also been cast in Ryan Murhpy’s upcoming film adaption of The Boys in the Band. Exciting things are up ahead for Charlie and his brother Max.

About Devin Jackson Randall 521 Articles
Geek by chance, and an artist by birth. Devin is a journalist and blogger who's always glad to share insights and developments on men's issues. Aside from news stories, he often writes about the roles placed upon men by society, and how both affect the relationships around us. Click on the hyperlinked text to follow him on --> Twitter. Email him at --> [email protected]
Website Twitter