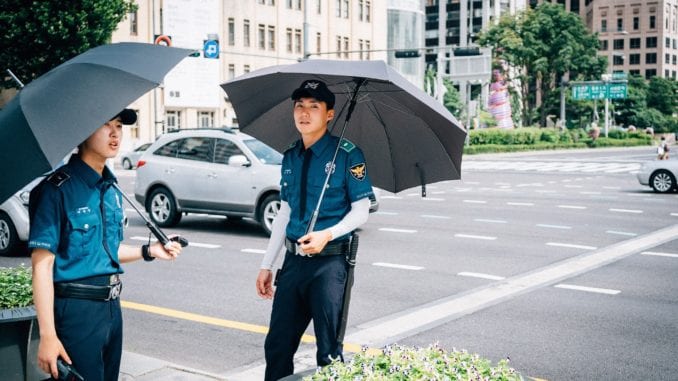 Chinese officials have had enough with men rolling up their shirts.

For us Westerners, the “Beijing bikini” may mean nothing. But for people in China and Eastern Asia, the term comes with a variety of reactions. The Beijing bikini is a fashion trend that has taken over the country and many parts of East Asia. Whenever it gets too hot outside, many men of varying ages, though mostly older men, roll up their shirts and let their stomachs breathe. But apparently, the trend is getting to be too much for many Chinese officials.

The Chinese city of Jinan has officially banned the fashion trend from being displayed on its streets. The city’s authorities are cracking down on the city’s 8.7 million populace to fight what they call an “uncivilized phenomenon.” According to an official notice, the government says seeing middle-aged men wearing no shirt or rolling up their shirts to show their bellies is “improper dressing in public places” and a “wanton exposure of body parts.”

These aren’t the only actions that authorities in the city are trying to fight. They have also announced a desire to crack down on public bickering, skipping lines, littering, and “uncivilized dog walking” (whatever that means). The city ultimately wants to enhance its image.

As you’d expect, this crackdown got a lot of pushback from only critics who say it’s over the top.

“Let the old people be free,” said one internet commenter, according to CNN.

This isn’t the first fight on shirtlessness conducted in China. Back in May, a man was fined around $7 after he tried to shop shirtless in a supermarket in Tianjin, a coastal city near Beijing. This was after the city banned men from going topless in public earlier this year.

Then in the town of Handan, the local government started a campaign against men going shirtless in public. This campaign included an educational mini-film, which you can watch here if you feel so inclined. The video shows a woman introducing her boyfriend to her father. Only, her father is shirtless while playing cards with friends at a public park. The boyfriend that pulls the woman aside to ask, “Is that your dad? He’s so uncivilized.”

After several other situations like this one, the father in the video decides to wear a shirt and hat when outside.

All this news is more of the same in China, a country that forces its citizens to fit the government’s expectation of the perfect citizen. But to see so much pressure put on the way that citizen’s dress is disheartening.

Don’t get me wrong, the idea of older men rolling up their shirts and walking around isn’t exactly what I want to see. That said, it should be their right to do so, especially during the increasingly hot summertime. Who’s it really hurting at the end of the day?

And the message behind the above-mentioned mini-film is especially upsetting. Having a man change the way he dresses because of societal judgment and expectations is exactly what people should be fighting.

So as that one internet commenter shared above, “Let the old people be free,” and their stomachs too for that matter.