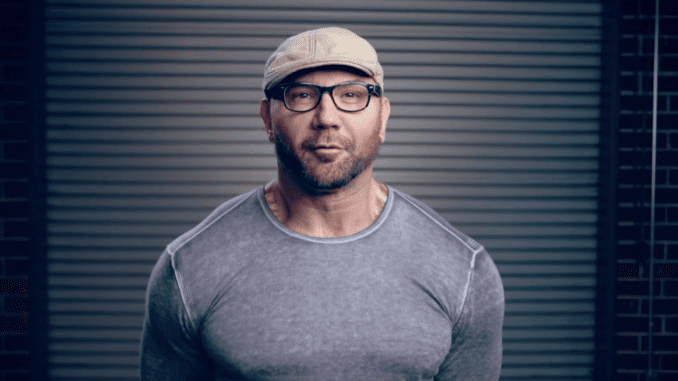 Dave Bautista In A Video Game?

Looks like video games are the next frontier for Hollywood actors.

Earlier this year, Keanu Reeves made waves at the Electronic Entertainment Expo or E3, a video gaming convention where companies announce new games and products. Reeves revealed that  he would be appearing in the game Cyberpunk 2077. This kickstarted a renaissance for Reeves where he had just come off a successful third John Wick film, a cameo in Netflix’s Always be My Maybe, and more. And now, it appears its Dave Bautista’s turn make waves in the video gaming world.

They’re listening. And they could give AF! 🙄.. but thank you for the support. Believe me when I say I’ve tried everything to make this happen. https://t.co/8THxKLkbdV

The Guardians of the Galaxy actor has been pushing for a Gears of War movie for a while now. Bautista tweeted out earlier this year that he had “tried everything” to make the movie happen. He even tried to rope in Hollywood sweetheart with muscles for days, Terry Crews. And while that seems to have resulted in only disappointment for the wrestler and actor, it did open the door for another job opportunity.

Gears of War is an Xbox property created by Epic games (the same company behind Fortnite). That said, this game is much more mature and graphic in its depiction of violence. Gears of War follows an apocalyptic universe where the human race is almost wiped out by a subterranean reptilian race called the Locust Horde. The game then follows a group of special operatives/military members who go out on missions to destroy the threat before humankind is destroyed instead. The game is hugely successful with three sequels, a prequel, and a sixth game just released on September 6th.

And it’s in this new game that Dave Bautista is joining the series.

It’s about damn time. Play as me in #Gears5 starting Sept 15 after @WWE Clash of Champions. @XBox @GearsofWar #DreamChaser pic.twitter.com/bCU4ZIjdw1

When To Play Him

Xbox and the WWE have joined together to create this promotional event for both companies. After the WWE’s Clash of Champions event, a digitized version of Bautista will appear on the game as a playable character.

That said, it isn’t a permanent addition to the game. This is a limited-time event for Gears of War 5. Bautista’s playable character will disappear from the game and from players’ hands after October 28. So if you want to play as the man behind Drax the Destroyer, you need to get ready for this event to drop soon.

After this event was announced, Xbox shared its excitement to join forces with the WWE star and Marvel actor.

“We started with the fantasy of ‘Bautista as Marcus,’ putting Bautista into Marcus’ armor, and starting with Marcus’ script. Then we added elements of ‘The Animal' Bautista into his voice performance and onto his look by adding his signature Hollywood shades to his character,” director Rod Fergusson told Xbox.com. “Bautista was great in the booth and I can’t wait for Gears and Bautista fans alike to stomp some Swarm as The Animal.”