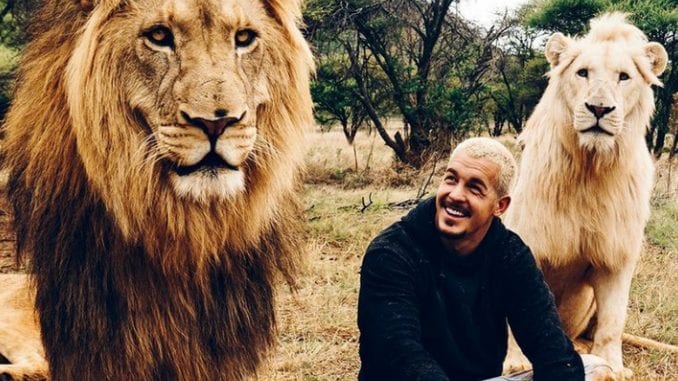 Dean Schneider is a 28-year-old Swiss native who left a lucrative career in finance to work with lions and other wild animals in South Africa. He calls himself a member of a pride of six lions and spends most of his time feeding and playing with them.

Dean Schneider doesn’t keep his lions caged and he doesn’t wear protective gear when he interacts with them. The lions live free and wild in a huge private animal reserve in South Africa.

Dean lives with the lions and other wild animals. He posts videos on social media that are equal parts amazing and jaw-dropping.

⚠️SIMPLE MATHEMATICS⚠️ We protect⚔️ what We love, we love❤️ what we know, we know📊 what we learn and we learn🤓 about things that EXCITE😍 us! DID YOU GET IT⁉️😜
•
Share this Video to help me Inspire & Educate the world🌍 about Animals!❤️ #moderneducation pic.twitter.com/rvqdawdukI

Is Dexter the lion about to make Dean his lunch or just sneaking up for a quick hug?

Dean Schneider owns and operates a 400-hectare space of wilderness in South Africa known as Hakuna Mipaka. The term is Swahili, and it means “No Limits”. It’s home to thousands of wildlife species. The Hakuna Mipaka project isn’t a tourist spot or game park for hunters. Dean relied on financial contributions from his family in the early years and he works tirelessly to make Hakuna Mipaka a protected, private wildlife reserve.

Dean Schneider drew some public criticism after a video surfaced of him punching a lion in his sanctuary. Dean considers himself to be a part of the lion pride and was quick to point out the meaning behind his actions. Lions often play fight and use physical force to rank among the pride. Dean doesn’t have claws or teeth, so he used a few well-planted punches to tell a female lion that she shouldn’t have clawed his face.

Dean Schneider began his professional career very early. He became a financial advisor in his early twenties. Perhaps it was luck or an instinct for economics, but Dean was able to start his own financial management company. After a few successful years in finance, Dean Schneider amassed the funds necessary to open his own wildlife reserve at the age of 24. His net worth can only be speculated as he and his family are very private about their financial dealings.

Dean Schneider credits Steve Irwin as one of his influences growing up. At the age of six or seven, Dean would watch Steve Irwin on television while he was a boy living in Zurich. Another one of Dean’s influences is his mother. She has always supported his passions for animal conservation and has made financial contributions to the Hakuna Mipaka Oasis project.

Surprisingly, Dean Schneider lists his core values on his website. These are the principles that have guided his decisions in life and helped to provide the foundation for his animal welfare project. Dean has five core values. They are loyalty, appreciation, freedom, kindness, and courage. Surely, these are qualities that any member of a lion pride must possess.

Dean might get most of his attention from showing off his beautiful lion pride, but he works with other animals, too. The Hakuna Mipaka Oasis has giraffes, zebras, leopards, and exotic birds. Dean is especially close with two baby monkeys and a spotted hyena. Dean wants to break the stigma about hyenas, pointing out that they get the villain role too often and they’re really beautiful animals.

Dean Schneider has his own non-profit charity organization. The Dean Schneider Foundation supports and operates worldwide projects for the protection of wild animals. Dean travels all over the world meeting with school children and speaking at conferences to increase awareness for wildlife and highlighting the significance of wild animals for the stability of natural ecosystems.

DISTANCE makes Us realize how CLOSE we want to be with one another🙏🏼❤️ Being loved and welcomed by a Lion Pride🦁 like this is the most satisfying and beautiful thing I could wish for in Life! This is the reason for Everything I Do 🙏🏼❤️
•
(1)) pic.twitter.com/g8vSiSKQ6U

Dean Schneider is the living embodiment of that urge some people have to just leave the world behind and do what you love. He’s a polarizing figure. For his social media followers, Dean is an inspiration. He’s someone who left the rat race to walk and live with wild animals.

However, some critics think that he’s an out-of-control narcissist who lacks training as an animal handler and is sending the wrong message. His detractors think that working and living with wild animals is a recipe for disaster.

Dean Schneider has a special relationship with the animals in his care though. He teaches us that money isn’t everything. He also shows us the majesty of wild animals up close and personal. In his own words –

“We need to learn to love them exactly the way they are and not the way we wish them to be!“